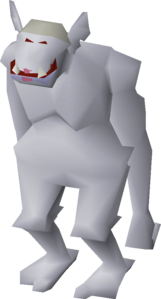 Like her husband, the troll mother speaks perfect English, unlike other trolls.