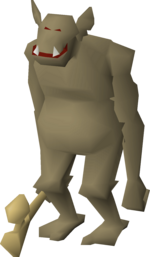 Troll spectators are trolls found in the Troll arena, where fights with Dad and Arrg take place. They watch instead of fight, just as the name suggests. They may be battled though, and are exactly the same as mountain trolls. They are non-aggressive, but if the player kills Dad, they will immediately attempt to attack the player.

The average Troll spectator kill is worth 793.34.