The Troll Stronghold is a stronghold inhabited by mountain trolls in the Troll Country. Notable trolls found inside include Burntmeat, My Arm, Ug and Kob from various quests involving trolls.

The stronghold itself is carved into the side of the mountain that the Mountain Camp is situated on top of.

The Stronghold has three levels, with the top level having some small windows carved out into the rock that overlook the aforementioned camp. The Troll Stronghold Storeroom, which contains the trolls' hoard of the rare herb, Goutweed, can also be found within the stronghold. The storeroom revolves around an activity in which players can steal Goutweed.

On the roof of the stronghold, there is a herb farming patch, which cannot become diseased, accessible to players who have completed the quest My Arm's Big Adventure. 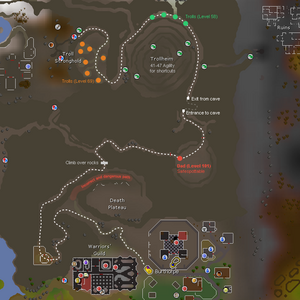 The route to the Troll Stronghold.

The main entrance to the stronghold is situated west of Trollheim, found atop a small slope found east of the small camp of trolls. This entrance takes you directly to the top floor of the stronghold. Players can get to Trollheim by using the standard spellbook spell Trollheim Teleport if they have completed the Eadgar's Ruse quest or by walking there from Burthorpe (Climbing boots are required).

There is also a southern entrance unlocked during the Troll Stronghold quest, found situated in a mountain passage between Burthorpe and the Fremennik Province (climbing boots are also required). This entrance grants access to the strongholds lowest level, where the trolls keep their prisoners. Players very commonly use the fairy ring system to get nearby - using the combination ajr (Kandarin), which takes them just south-west of this entrance. You must remember climbing boots to scale the rocks to get to this entrance.

After the quest Making Friends with My Arm players can create Stony basalt, which can be used to teleport to the entrance of the stronghold. After the Fremennik Hard Diaries and with 73 Agility this teleport is changed to the roof of the stronghold near the herb patch.

Map of the stronghold[edit | edit source] 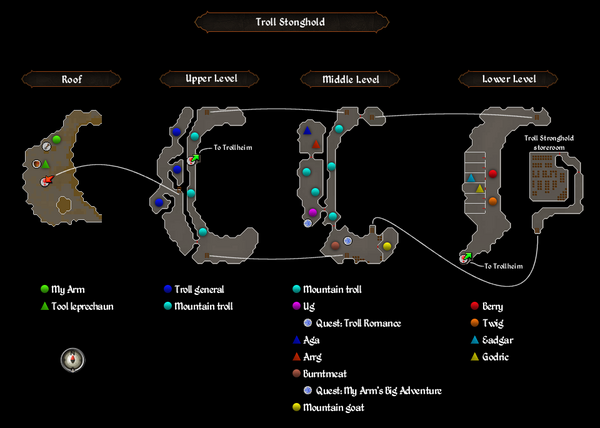 The small camp found outside the Stronghold proper is home to various mountain trolls. The main entrance to the stronghold is found just north of the camp. The mountain trolls are aggressive and can hit fairly high on lower level players, but the area is single-way combat. If you are on a troll slayer task from Konar quo Maten, restricted to the Troll Stronghold, the trolls in the camp also count towards your task.

The roof, or mountaintop, is the highest level of the Stronghold, and is featured in the My Arm's Big Adventure quest. The troll farmer My Arm can be found here, attempting to grow things. A disease-free herb patch which can be used for Farming, and a vacationing Tool leprechaun who will happily look after your tools can also be found here.

The top floor is where the main entrance to the stronghold leads, and from here you can access the rest of the stronghold. This floor is inhabited by many mountain trolls and contains three fearsome troll generals. The upper level has a ladder leading to the rooftop and two sets of stairs that leading down to the middle level.

The middle floor is home to the kitchen where Burntmeat and several troll cooks cook humans and goats. It is also home to the living quarters, where the majority of trolls live. Ug, Aga and Arrg can be found here, and they all play a part in the Troll Romance quest.

A door in the northern section of this floor leads to a staircase that goes to the prison section of the lowest floor, and the stairs in the kitchen lead to the storeroom, where Goutweed is stored.

The lowest floor has two sections: the prison and the storeroom.

The prison is where the trolls store their prisoners, which include Mad Eadgar and Dunstan's son, Godric. They are guarded by two sleeping trolls, Berry and Twig. The exit to the south of the prison leads to the passage between Rellekka and Burthorpe.

The Storeroom is where the prized ingredient for troll cooking is kept: Goutweed.