Trollweiss Mountain is a snowy mountain located in Troll Country and is one of the largest mountains in Gielinor. The Troll Romance quest must be completed, and players must have a sled to travel over it.

It is covered year-round in a thick layer of ice and snow, and powerful winds constantly sweep across it. Because of this harsh environment, little can survive apart from ice wolves, evergreen trees, and the endangered Trollweiss flower.

To reach the mountain peak, players must enter a cave north of the Troll Stronghold and just west of the Ice Path. The cave is filled with ice trolls and leads to the summit. On the summit the gnomish explorer Brambickle can be found.

The mountain slopes down steeply from north to south, making northward travel impossible on land. Players must use a sled to slide down from the summit. Along the slope are sapphire, chaos rune, and sled item respawns. At the base of the mountain is a tunnel that leads to both Keldagrim and the Fremennik Province.

Trolls have no settlements on the mountain, although they do visit it from time to time. 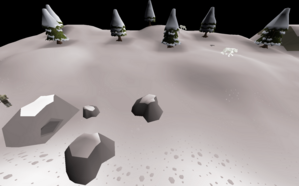 Ice wolves prowling around the summit of the mountain.

Far underneath the mountain lies the dwarven metropolis of Keldagrim, which was founded thousands of years ago during the God Wars. Without Trollweiss Mountain, it is very possible that the dwarves would have been driven to extinction.

Much of the snow on Trollweiss Mountain works its way beneath the surface into crevices, where it melts. The resulting water seeps down until it penetrates the ceiling of large underground caverns. From there it collects to form the River Kelda, which flows through Keldagrim. 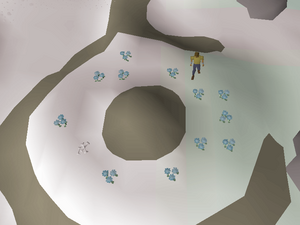 The spot to dig if doing the elite clue.

Although requiring only partial completion of Troll Romance, players need to slide down to where Trollweiss grows on Trollweiss Mountain in order to complete an elite cryptic clue: Green is the colour of my death as the winter-guise, I swoop towards the ground.

The same location is also used for the elite emote clue: Panic at the area flowers meet snow. Equip blue d'hide vambraces, a dragon spear and a rune plateskirt.

Speaking to Brambickle is required for a hard anagram clue: This anagram reveals who to speak to next: BAKER CLIMB.