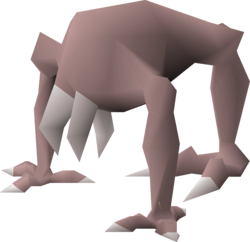 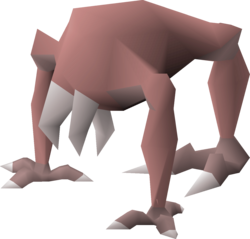 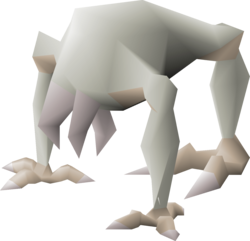 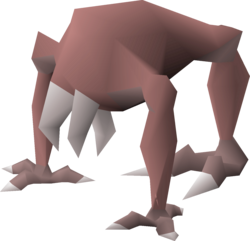 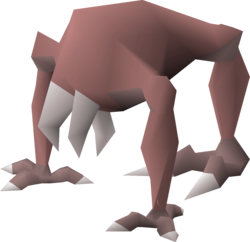 Turoth are Slayer monsters that require a Slayer level of 55 to kill. They drop herbs and seeds commonly, though not as frequently as aberrant spectres, as well as frequent nature runes. In addition, they also drop the leaf-bladed sword.

Turoth, like Kurask, can only be damaged with leaf-bladed weapons, broad arrows and bolts or the Magic dart spell. Turoth are immune to other types of attacks, thereby establishing hidden skill requirements to kill them (particularly for ironmen). Though most of the means available for attacking them cannot inflict poison, it is still possible to inflict venom by using either a serpentine helm or a Toxic staff of the dead with Magic dart. This also means the Dwarf Multicannon is ineffective, and cannot be placed in this area.

Although Turoth are invulnerable to any damage from the eldritch nightmare staff, Saradomin godsword and toxic blowpipe special attacks, they will still heal the player as if it would have dealt damage, making them useful as special attack weapons during extended trips. The ancient mace special attack also restores Prayer points equal to the damage that would have been dealt. Guthan's equipment's set effect does not work.

The majority of the Turoth are level 83 and 85; there is only one level 89 and three level 87s in the dungeon.

Slayer rings offer immediate access to Fremennik Slayer Dungeon. For those without access to slayer rings, a fairy ring (code: AJR) is conveniently located outside the dungeon. Other alternatives include the lyre, Fremennik Sea Boots and Teleport to House if the player's house is located in Rellekka. Players who are unable to use any of these options can use a Camelot teleport and make a long run north/north-west towards Rellekka and then east after passing the second bridge. Alternatively, players may teleport to Lunar Isle without a seal of passage and talk to an NPC to be kicked off the island to Rellekka; they may also teleport to Waterbirth Island and take the boat to Rellekka.

Drop rates estimated based on 340,641 samples from the Drop Rate Project, unless otherwise cited.