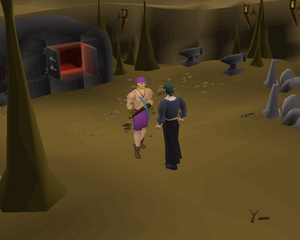 The Tutorial Island mine is a mine located in underground Tutorial Island, which is accessible only by new players. It is part of a larger underground area which also includes the combat instructor and giant rats; however, they are separated by a gate.

Inside the mining area of the underground area are copper and tin rocks, a furnace, an anvil, and the Mining instructor, Dezzick, who teaches players how to mine, smelt, and smith.

Players should note that this would have been one of the best sites to train both Mining and Smithing due to the proximity of the ore rocks, furnace, and anvils. On the other hand, players are only allowed to train their skills in here (as well as on the rest of the island) not beyond level 3.