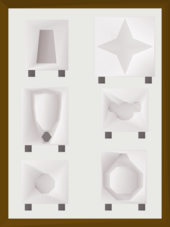 A Tool store 4, with all its crafting moulds on display.

The easiest place to get basic Crafting tools is the Little Shop of Horace in Hosidius, which sells Shears, Needles, and Thread. For more advanced Crafting materials, many are only available through various Tool stores placed within the player's house. The Tool store 3 is the only way to get a Glassblowing pipe within the League, and the same is true with Tool store 4 and its various crafting moulds. A Holy mould can be found in the Monk camp south of Hosidius.

The traditional Sapphire, Emerald, Ruby, and Diamond gems can all be obtained from a variety of sources, in both cut and uncut form. However, there are no methods by which to obtain the semi-precious Opal, Jade, and Red topaz gems.

Uncut dragonstones can be obtained as a common drop of ten noted gems from Skotizo, or as a rare single drop from Brutal black dragons. Cut Dragonstones are also on the Standard Rare Drop Table, meaning there is a rare chance for them to be dropped from Fire giants, Sulphur Lizards, Mutated Bloodvelds, and Lizardman shamans.

Skotizo has a 1/1,000 chance of dropping an Uncut onyx, though it is much more likely for players to get an Onyx drop from Tekton in the Chambers of Xeric, who drops it at rate from 1/70 and 1/450.

Starting at 0%, the only way to gain Hosidius favour is to use a Plough to plough fields in the south of the city. Occasionally, these Ploughs can break, and must be fixed with a hammer. Fixing the Plough gives 50 Crafting experience each time, so it would only take 24 fixes to reach level 10 Crafting, at which point the player can make Bow strings for faster experience.

Another easy method to train Crafting starting at level 1 is by shearing Sheep for their Wool, and spinning it into a Ball of wool at a Spinning wheel. The best place to do this is at Watson's house in Hosidius, which has a Spinning wheel inside and plenty of Sheep in the back yard. Each Ball of wool gives 12.5 experience when spun, so it would take 93 Balls of wool to reach level 10 Crafting just by making Balls of wool. The Balls of wool can be dropped after spinning or banked at the nearby Hosidius Kitchen, for use in future Jewellery crafting or for making Dynamite.

At level 10 Crafting, it is possible to spin Flax into Bow strings at a Spinning wheel. The easiest way to do this is to stock up on Flax by picking it at Land's End behind the northernmost building, or north of the Hosidius cow field and banking it, and then to use the bank in the Hosidius Kitchen to quickly spin the Flax into Bow strings at Watson's house nearby. Each Bow string gives 75 Crafting experience, and up to 750 can be made per hour on average, for up to 56k Crafting experience per hour. Bow strings are very useful for later Fletching training and moneymaking, as strung bows sell and alch for significantly more than their unstrung versions. 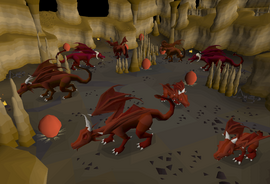 The Forthos Dungeon under Hosidius has plenty of Red dragons along with Eodan, who can tan their Red dragonhide drops into Red dragon leather. This makes it possible create a self-sustaining loop of killing dragons, tanning their hides, crafting the hides into pieces of Red dragonhide armour, then alching the result. Each piece of Red dragon leather equates to 390 Crafting experience, with hourly rates of up to 30,000 Crafting experience per hour (though personal rates will be highly dependent on the player's combat gear and ability to quickly kill Red dragons). While not the fastest way to train Crafting, it can be a good way to train Prayer, train Crafting, and make some coins at the same time.