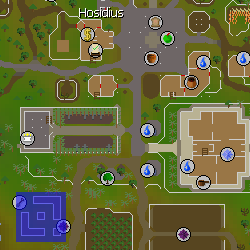 The location of the Hosidius Farming patches.

Before level 45 Farming, the only traditional Farming patches available to the player are found in Hosidius, with two allotment patches, one herb patch, and one flower patch. With at least 50% Hosidius favour, this group of patches will be immune to disease. A Spirit tree patch can also be found in Hosidius, though it can not be used until much higher Farming levels. At level 34 Farming and 100% Hosidius favour, the Tithe Farm minigame becomes available, allowing for focused Farming training rather than simply waiting for crops to grow. With level 36 Farming, the Hosidius Vinery can also be farmed with Grape seeds, which can be bought from Farmer Gricoller's Rewards at the Tithe Farm. 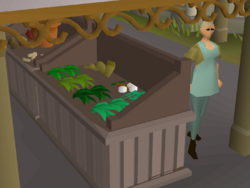 Most Farming equipment can be bought at Vannah's Farming Stall in Hosidius, or from Allanna's Farming Shop in the Farming Guild. Most farmers who watch over crops will also sell some farming supplies through their dialogue. Some unique Farming equipment can be bought Farmer Gricoller's Rewards at the Tithe Farm, such as the Gricoller's can and Farmer's outfit.

Starting at level 38 Thieving, it is possible to pickpocket Master farmers for seeds. Most of these seeds will be low-level, and it is not possible to pickpocket tree seeds or fruit tree seeds from them. Master farmers are mostly useful for training up through the early levels of Farming, before the player can get seeds through Farming contracts or train Farming at the Tithe Farm. 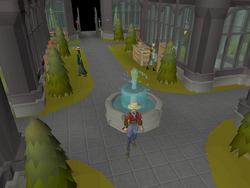 The interior of the Farming Guild, where Guildmaster Jane can be found.
Main article: Farming contracts

With access to the Farming Guild at level 45 Farming, players can ask Guildmaster Jane for a Farming contract. Completing a contract gives a Seed pack as a reward, which can be opened for a variety of seeds depending on the contract's difficulty. Completing Farming contracts is one of the best ways to get mid-level and high-level seeds, and is a good way to gain seeds while passively training Farming in the guild anyways. Choosing the Unnatural Selection relic will allow players to choose their own farming contracts; this can greatly speed up seed pack acquisition if players choose back-to-back contracts for crops that have already grown but have not yet been checked or harvested. Unlike Slayer assignments, this relic does not allow players to choose the same farming contract twice in a row.

Besides the two aforementioned "dedicated" ways to obtain seeds, it is likely for the player to passively accumulate seeds through a variety of other activities. One of the most common such activities is combat, with some high-level monsters like Lizardman shamans or Sarachnis commonly dropping high-level Farming seeds. On long Slayer tasks against monsters with multiple seed drops, it might be useful to bring along a Seed box, to save on inventory space. The Wintertodt's Supply crates also have a decent chance of giving seeds as a reward, with the quality of the seed depending on the player's Farming level. 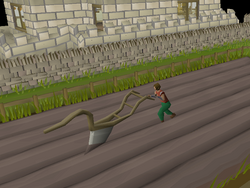 At level 1 Farming, one way to get some early levels is by ploughing fields with a Plough in the south of Hosidius. Ploughing fields is the only way to gain Hosidius favour starting from 0%, so there is good chance the player would want to do this regardless. Ploughing the field will periodically give 50 Farming experience, which can add up to a few levels over time. While not a good long-term training method, it might be useful to skip some of the worst Farming crops, and get straight to planting something a bit better like Cabbage seeds.

At low levels, the most straightforward way to train Farming is to simply grow crops in the few patches available. With the boosted experience rates in the League, it should not take very much time before the player can move on to better methods or the different types of patches in the Farming Guild. Even activities such as raking weedy patches, filling Compost buckets from the Compost Bin, and using compost on a farming patch give small amounts of Farming experience. For the best experience rates, it is generally recommended that the player plants the highest-level seeds they have available, though other considerations such as Herblore training are important when considering what seeds to use. 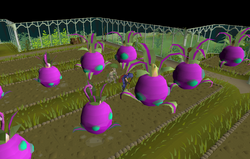