Early Firemaking training pairs well with early Woodcutting training, so it is recommended to bring along a Tinderbox while training low-level Woodcutting. Burning regular Logs gives 200 Firemaking experience each, so it would take only 13 Logs before reaching level 15 Firemaking. If the player is training Firemaking and Woodcutting in tandem, their Firemaking level will outpace their Woodcutting level progress. In this case, players can either continue to burn regular Logs past level 15, or use the Logs for another purpose, such as for training Fletching.

Again, these low Firemaking levels are easy enough to train while training Woodcutting. Every set of Oak logs burnt gives 300 Firemaking experience. Once the player has hit level 30 Firemaking but is not yet level 30 Woodcutting, they may choose to use the extra Oak logs for Fletching training, or to bank them for later use as Construction materials.

Burning Willow logs gives 450 Firemaking experience each, and the fast rate of chopping Willow trees makes this a quick way to train Firemaking up to level 50. After level 50 Firemaking, it is recommended to switch to training at the Wintertodt.

From level 50 Firemaking onward, fighting the Wintertodt is the most rewarding way to train Firemaking, and is very quick in terms of experience rates as well. 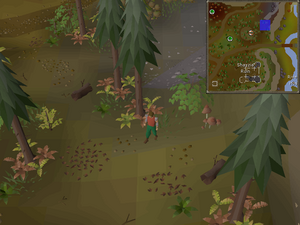 The dig location of the Clue hunter garb, one of the few easily-available pieces of warm clothing.

While fighting the Wintertodt, the player will periodically take damage from the cold, as well as the Wintertodt's various attacks. To mitigate damage from the cold, the player must wear pieces of warm clothing, with four pieces giving the maximum protection. That said, there are only three pieces of warm clothing available in the Twisted League outside of the Wintertodt's own rewards. These three pieces are the Clue hunter garb (which can be dug up south of Kourend Castle), a Staff of fire (bought from Filamina's Wares, with at least 20% Arceuus favour), and the Lit bug lantern (bought from Konar quo Maten, requires level 33 Slayer to equip). The Wintertodt can also reward the player with pieces of the Pyromancer outfit and the Warm gloves, all of which count as warm clothing.

The damage done by the Wintertodt scales based on the player's Hitpoints level, so many players prefer to train Firemaking here before doing significant combat training. Especially with less than four pieces of warm clothing, it is recommended to have a decent amount of food, either on hand or in the bank ready to be used. At low Hitpoints levels, food like Jugs of wine (can be bought at The Golden Field) or Cakes (can be stolen from Bakery stalls) will suffice, but at higher levels or with fewer pieces of warm clothing, the player may want to bring better food.

For chopping the Bruma roots, any axe from Steel upwards provides the same bonus, so it is recommended that the player has at least a Steel axe. The easiest way to obtain one of these at a low level is to smith one by hand, though they can also be obtained as a monster drop or from the axe shop in the Woodcutting Guild. 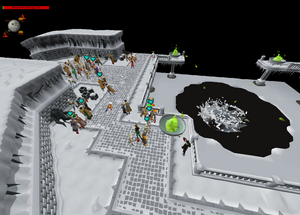 Defeating the Wintertodt rewards significant amounts of Firemaking experience along with Supply crates, which can be opened for resource rewards. The quality of these rewards depends on the player's levels in other skills, so it may be prudent to train other skills at least a bit before heading to the Wintertodt. For example, a higher Fishing level will lead to more Raw shark rewards, rather than Raw salmon. The Wintertodt also has a number of unique rewards, only obtainable through the minigame. The most notable of these are the Tome of fire, the best Magic shield, and the Dragon axe, the best axe. However, both these rewards are very rare, so it should not be suprising if neither of them is gotten by the time the player reaches level 99 Firemaking.