The island at the centre of Lake Molch, where a Knife can be found.

A Knife can be bought at Logava Gricoller's Cooking Supplies, or at the Warrens General Store, which requires at least partial completion of The Queen of Thieves to access. Alternatively, there is a free Knife spawn near Alry the Angler at the centre of Lake Molch, easily accessed by the Boaty west of Shayzien.

For making Bow strings, the best place to pick Flax is around Land's End, as the Bank deposit box in Land's End makes it easy to stock up a large amount to spin later. Bow strings can then be spun on the Spinning wheel in Watson's house, using the bank in the nearby Hosidius Kitchen. Feather packs can be bought at the Warrens Fish Monger in The Warrens, which requires at least partial completion of The Queen of Thieves to access. 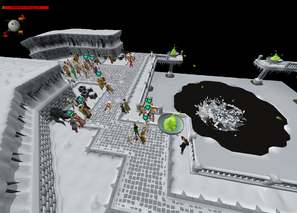 Players who have unlocked the Broader Fletching perk with 300 Slayer reward points can buy Broad arrowheads in packs from Konar quo Maten, and attach them to Headless arrows to make Broad arrows. Broad arrows are in between Mithril arrows and Adamant arrows in strength, but the comparative ease of getting Broad arrowheads compared to Mithril arrowtips or Adamant arrowtips makes this a much easier way to train Fletching and produce good ammunition for Ranged training. Making a Broad arrow gives 50 Fletching experience, not counting any experience gained while making Headless arrows.

Much like Broad arrows, Broad bolts are a solid general-purpose Ranged ammunition, and are easy enough to get in bulk by buying Unfinished broad bolt packs from Konar quo Maten. Attaching Feathers to a Unfinished broad bolts gives 15 Fletching experience each. This is significantly less experience for the cost when compared to Broad arrows, but Broad bolts only require Feathers to finish, making them a bit easier to make. The choice of which Broad ammunition to make comes down to what ammunition the player needs more of, and how much they are willing to spend on Fletching training.

One low-intensity method to train Woodcutting and Fletching together is to chop Yew trees and fletch the Yew logs into Yew longbows. The unfinished bows can be strung with Bow strings, which the player may have anyways from low-level Crafting training. Fletching a Yew longbow (u) gives 375 Fletching experience, and attaching a Bow string gives 375 more Fletching experience, for a total of 750. Yew longbows can be sold or alched for a decent amount of coins, making this a good way to gain some money while training in a relaxed way.