Pickaxes to mine with can be most easily sourced from Toothy's Pickaxes, in Lovakengj. The Hosidius mine also has a Bronze pickaxe spawn nearby, making it easy to start there for some low-level Mining training. There are no Gold rocks or Runite rocks in Great Kourend or the Kebos Lowlands, and only four Silver rock found in the Hosidius mine and the Piscarilius mine. A list of all traditional mines, along with the number of each mining rock they have, can be found below. Besides the listed traditional mines, Great Kourend also contains the dense essence mine, the Sulphur mine, and the Blast mine minigame.

At level 1 Mining, the only ores a player can mine are Copper ore and Tin ore. At 87.5 Mining experience per mined ore, it only takes 28 ore to reach level 15 Mining, at which point the player can mine Iron rocks for Iron ore. Copper rocks and Tin rocks be found in both the Hosidius mine and the Piscarilius mine. The Hosidius mine is closer to a bank by walking, but after unlocking the Lovakengj Minecart Network, the nearby minecart can be used to quickly transport the player between the Piscarilius mine and a bank in Lovakengj. 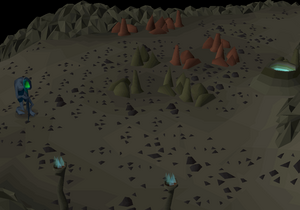 The Mount Karuulm mine, with one of the two best locations for powermining Iron.

From level 15 Mining onward, mining Iron ore becomes the fastest way to train the skill. Iron rocks can be found in the Hosidius mine, Mount Karuulm mine, Piscarilius mine, Lovakengj mine, and Shayzien mine. The Lovakengj mine and Mount Karuulm mine both have a tile with three adjacent Iron rocks, which allows for the fastest possible training. Those two mines both have a nearby bank and furnace, making it easy to store the Iron ore for later use, or process it into bars right away.

While not as fast for training as mining Iron ore, Coal is necessary for most Smithing training methods, and mining Coal rocks is the fastest way to reliably acquire it. Coal rocks can be found in the Lovakite mine, Lovakengj mine, Mount Karuulm mine, and Shayzien mine. The Lovakite mine has the most amount of Coal rocks, and is closest to a bank, but requires at least 30% Lovakengj favour to use. The Lovakengj mine and Mount Karuulm mines are both relatively close to banks, and have a nearby furnace as well for easy bar production. 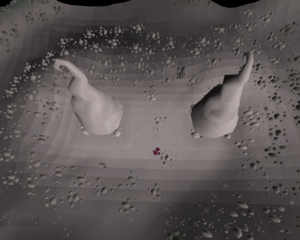 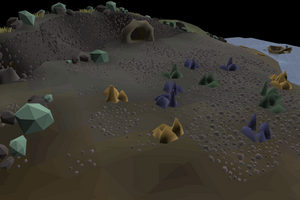 The Kebos Lowlands mine, the most abundant source of Mithril and Adamantite rocks.

Mithril rocks can be found in small quantities at the Piscarilius mine, Shayzien mine, and Lovakengj mine. Each of these mines also has a number of Coal rocks in it, making it easy to collect all the necessary ingredients to make Mithril bars in one location. The Kebos Lowlands mine has the most Mithril rocks of any mine, but the nearest bank is in the Farming Guild, which requires level 45 Farming to access. Each Mithril ore gives 400 experience when mined. Mining Mithril rocks is not particularly fast in terms of Mining experience, but it is the best way to get Mithril ore for use in Smithing training.

Only two mines contain Adamantite rocks, the Shayzien mine (with two rocks) and the Kebos Lowlands mine (with four rocks). Each Adamantite ore gives 475 experience when mined. Much like Mithril, mining Adamantite ore is useful mostly for high-level Smithing training, rather than for the Mining experience it gives. 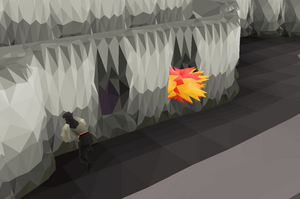 A player using Dynamite to mine ore at the Blast mine.
Main article: Blast mine

With 100% Lovakengj favour, players gain access to the Blast mine minigame. Though it can be used at any level, the Blast mine is most useful for its ability to give ores up to 10 levels above the player's Mining level, meaning that at level 75 Mining, it can reward Runite ore. Training at the Blast mine requires Dynamite, which can be handmade by the player, bought at Thirus Urkar's Fine Dynamite Store, rewarded from a Wintertodt Supply crate, or earned at the Chambers of Xeric. The process of making Dynamite by hand can be very time-consuming, so it is recommended instead to use Blast mine for some bonus Mining experience and ore after getting Dynamite at the Wintertodt or Chambers of Xeric. Without factoring in the time it takes to collect Dynamite, experience rates at the Blast mine can reach over 300k experience per hour, making it the fastest way to train Mining, assuming the player has the Dynamite necessary.