At low levels, the easiest way to train Prayer is to simply bury any bones the player gets. Bones are most often obtained through combat, though hunting crimson swifts and copper longtails for early Hunter training will also give bones. Burying bones within the Catacombs of Kourend also restores a small amount of Prayer points based on the type of bone buried. A list of all obtainable bones and the experience they gave when buried follows: 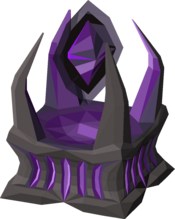 With at least 60% Arceuus favour it is possible to switch to the Arceuus spellbook, which has a number of reanimation spells for ensouled heads. These ensouled heads can drop from a variety of monsters, from as low as goblins to as a high as dragons. Killing reanimated monsters gives a chunk of Prayer experience depending on the type of ensouled head used, up to 7800 Prayer experience for killing a Reanimated dragon.

If the player happens to be on the Arceuus spellbook when the ensouled head drops, they can immediately reanimate the monster, and kill it on the spot for some easy Prayer experience. Some reanimated monsters, like the Reanimated abyssal, even count towards the player's Slayer task, if they are on one. Alternatively, ensouled heads can be saved up and used at the Dark Altar. This can be a bit time-consuming, as the Dark Altar is not particularly close to any banks or teleports. The easiest way to get to the Dark Altar is with the Arceuus Home Teleport spell, though this is limited to one use every 30 minutes. The second-best option may be the bank near the Wintertodt, which can be accessed with a games necklace.

One major consideration with training Prayer through ensouled heads is the difficulty in acquiring nature runes. There are no shops that sell Nature runes, so the most reliable way to get them is by killing various monsters, with high-level monsters like drakes tending to drop them in larger quantities. Because of this, it may not be worth reanimating low-level monsters, especially early on when Nature runes could be quite scarce.

With at least level 45 Construction, players can construct a personal altar in their Player-owned house's Chapel. Sacrificing bones at a teak altar or better grants additional experience compared to simply burying them, up to a 75% experience bonus with the limestone altar. At level 61 Construction, two incense burners can be added to the Chapel, giving an additional 50% experience bonus each when lit with a tinderbox and marrentill. With burners and the Limestone altar, it is possible to reach a total experience modifier of 275% additional Prayer experience per bone.

The easiest way to train at the Player-owned house is with the Xeric's talisman. The Xeric's Honour (once unlocked) and Xeric's Inferno teleports both take the player close to a bank, and the Xeric's Glade teleport takes them to Hosidius just north of the POH portal. Because of the extra time it takes to process bones in this way, it is generally recommended to only use the Player-owned house Chapel for higher-level bones where the extra experience boost is worth the effort. 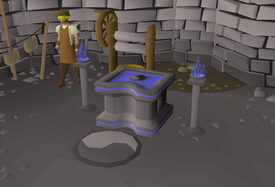 To unlock access to the Sacred Bone Burner, the player must either pay Olbertus five dragonstones, or kill a level-186 Shaeded Beast. If the player chooses to kill the Shaeded Beast, they will have to offer 100 Babydragon or Dragon bones before the Sacred Bone Burner will give Prayer experience when using it. Training in the Forthos Dungeon is fairly self-contained, with a nearby altar to restore Prayer points, and occasional grubby key drops for resupplies at the grubby chest.