At level 1 Thieving, the only way to train the skill is pickpocketing men and women. They can be found all around Great Kourend, with plenty wandering about near Kingstown, Hosidius, and Port Piscarilius. Each successful pickpocket gives 40 Thieving experience, so it takes only 10 successful pickpockets to reach level 5, at which point the player can switch to Bakery stalls for faster training.

Bakery stalls can be found in the Hosidius town square and in the Kourend Castle courtyard. Stealing from one gives a random baked good and 80 Thieving experience. The stalls restock relatively quickly (every 5 ticks, or 3 seconds), so it is possible to reach up 96,000 Thieving experience per hour training on them. That said, it takes only 94 successful steals before the player should hit level 25 Thieving, at which point it is recommended to switch to Fruit Stalls if possible. 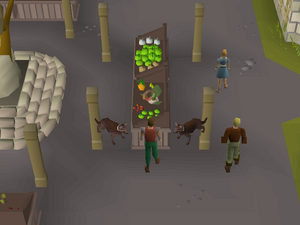 The Fruit Stall found in the centre of Hosidius, with the guard dogs trapped between the wooden supports.
Main article: Fruit Stall

Stealing from Fruit Stalls can also be useful for making Supercompost early on in a player's Farming training, as the Jangerberries, Papayas, and Pineapples can all be placed into the nearby Compost bin to make Supercompost. Players may also wish to bring along Baskets to hold the Strawberries, Cooking apples, and Bananas to use as various crop protection payments.

Pickpocketing the Master farmer in Hosidius can be a good way train Thieving while also getting seeds, especially low-level seeds for early Farming training. The Master farmer east of the central square can be easily trapped in a corner within his house, making it easy to pickpocket him for long periods of time with very little effort. There is also one within the Farming Guild, which is slightly closer to a bank. That said, even at level 99 Thieving it is still possible to fail to pickpocket him, so it is recommended to bring along some food to heal off the damage he deals on a failure. A Seed box from the Tithe Farm minigame can make storing all the various kinds of seeds Master farmers give a bit easier, though players might just as easily just drop the lowest-level seeds if they have no intent of using them. Seeds for Hops are worth only the small amount you may get from the shop, as there are no hops patches in Kourend. 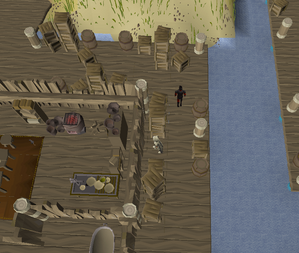 A player hiding from a Patrolman while returning an artefact to Captain Khaled.
Main article: Stealing artefacts

With at least 75% Port Piscarilius favour and a lockpick, players can participate in the Stealing artefacts activity for Captain Khaled. The exact experience rate depends on the player's Thieving level, as well as their speed in completing each theft. That said, at higher Thieving levels and with good knowledge of the activity's strategies, it is possible to reach extremely high Thieving experience per hour. This activity also provides a small amount of coins and Port Piscarilius favour for each artefact turned into Captain Khaled, which could be helpful for players yet to reach 100% favour. Participating in this activity requires a Lockpick, which can be obtained by killing Scavenger beasts in the Chambers of Xeric or catching Young implings bare-handed, which requires level 32 Hunter.

At level 64 Thieving, it becomes possible to steal from the Stone chests inside the Lizardman Temple. Each successful steal gives 1,400 Thieving experience, and the contents of the chest refresh very quickly, making it possible to reach very high experience rates here. That said, with every failure there is a chance to be teleported out of the Lizardman Temple completely, significantly slowing training especially at lower Thieving levels. These stone chests are most notable for their rare Xeric's talisman drop, which is its only source besides killing Lizardmen. This training method can also be combined with some Crafting training, by making pieces of the Xerician robes set with extra Xerician fabric.