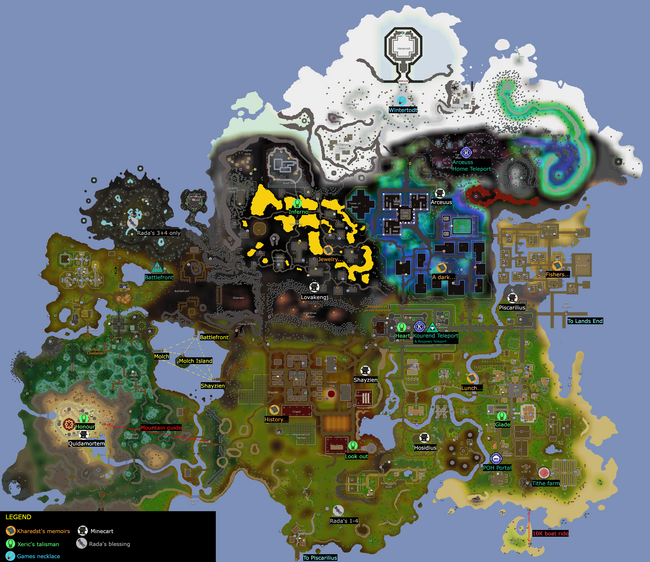 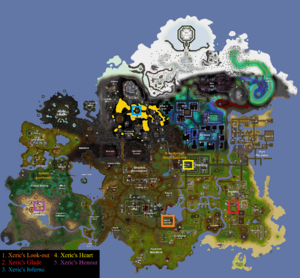 A map of the Xeric's talisman's teleportation destinations.

The most useful piece of teleportation jewellery is the Xeric's talisman, with five different teleports around Great Kourend and the Kebos Lowlands. The talisman can be obtained as a drop from different types of lizardmen at a rate of 1/250, or can be stolen from the stone chest in the Lizardman Temple at a rate of 1/300. The Xeric's talisman is charged with Lizardman fangs, which can be obtained from killing Lizardmen, stealing from the Stone chest, or as a reward from the Chambers of Xeric.

Kharedst's memoirs is a teleportation book first obtained as a quest reward from completing the Client of Kourend quest. When first obtained the book has no function, but completing various quests within the Great Kourend quest series unlocks different teleport locations: one for each city in Great Kourend. In particular, the teleports to Shayzien, Arceuus, and Port Piscarilius are quite useful, as there are no other teleports directly to those cities. To add teleportation charges to the book, the player must take it to the Old Memorial north of Land's End, where charges can be added at the cost of one law rune, body rune, mind rune, and soul rune. 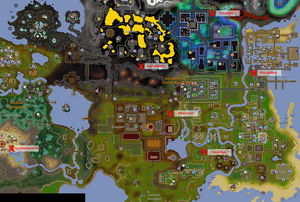 A map of the Lovakengj Minecart Network.

The Rada's blessings can be used to teleport to the Kourend Woodland and to Mount Karuulm, depending on the tier of the blessing:

While most teleportation spells are unusable due to them being outside the League's boundaries, there are still some teleports around Great Kourend that can be used.

On the Standard spellbook:

On the Arceuus spellbook:

Once the player has entered the Tithe Farm at least once (requires 100% Hosidius favour and level 34 Farming) they can travel there using the teleport option in the Minigame Group Finder once every twenty minutes.