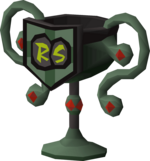 A player performing the trophy emote.

The twisted adamant trophy is a cosmetic reward that could be obtained by being in the top 20% of players in the Leagues Hiscores by the end of the Twisted League, which required having at least 5,270 League points to do so. When equipped, the trophy can be right-clicked to perform the Trophy Emote.

The trophy can be displayed by using it on furniture built in the League hall's pedestal space.

If lost, players can reclaim it from the Leagues Tutor, or from furniture built in the League hall's trophy case space.