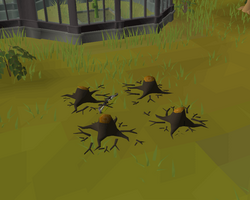 The twisted bow spawn, unreachable after tree stumps were added around it.

The twisted bow glitch was a major glitch that occurred on 28 February 2019.

After an update, a twisted bow item spawn was found directly east of the cactus patch outside the Farming Guild. Players could pick it up and it had a respawn time of 60 seconds.

The cause of the glitch was soon discovered to be that while mapping the flower behind the Hespori cave entrance, a twisted bow spawn was also accidentally mapped on the other side of the guild wall.[3] As the bug was not as widespread as the coin pouch glitch, Jagex did not originally intend to roll the game back, and said that the Old School Team would be working with the analytics team to identify and track the bows obtained from the glitch[4] and would take action against accounts which had abused the bug, including removing coins and platinum tokens obtained by selling bows obtained via the glitch.[5] 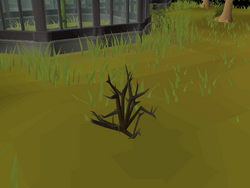 The twisted bush placed in commemoration to the glitch exactly where the bow spawned.

At 15:30 (UTC), the game was rolled back and brought live again with the item spawn removed.[7] In reference to the glitch, a "twisted bush" was placed where the item had previously spawned, which can be searched by players but results in a chatbox message stating, "You don't find anything."

Players who used wealth from the illegitimately gained twisted bows to buy bonds for membership had action taken against their accounts. Some players were initially permanently banned for abusing the bug; after Jagex opted to roll the game back, these players had their offence reduced to a temporary ban.[8]

The twisted bow glitch resulted in the second ever rollback of Old School RuneScape since its inception, as well as being the second rollback within a year, the first one being due to the coin pouch glitch.

On the anniversary of the glitch, the official Old School RuneScape account tweeted that they were aware of an issue east of the Farming Guild on world 302, and as they were working on a fix, asked players to avoid the area in the meantime.[9] When players visited the area, several Jagex Moderators were at the area, transformed into twisted bows as a joke.