From Old School RuneScape Wiki
Jump to navigation Jump to search
The RuneScape Wiki also has an article on: rsw:TzHaar
This article is about the race. For the music track, see TzHaar! For the city, see Mor Ul Rek. 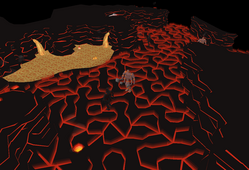 The outer city of Mor Ul Rek, home of the mighty TzHaar.

The TzHaar (pronunciation: /zɑr/ "ZAHR") are a race of golem-like creatures that inhabit Mor Ul Rek, a lava-filled region beneath Karamja Volcano. The word "TzHaar" means "holy (sacred) fire". The TzHaar society is unlike any other, and only vaguely resembles any that exists on the surface.

Despite their fearsome appearance, the TzHaar are a peaceful race, and have existed beneath the surface of Karamja for thousands of years. Even today, the finer aspects of their society remain a point of great mystery amongst scholars.

Biologically, the TzHaar are one of Gielinor's greatest marvels. They appear roughly humanoid, but are made of solid obsidian and magma. Even though they appear fearsome, they are actually gentle and kind, albeit still wary of outsiders. They possess four powerful arms, and are physically very strong, with their guards capable of lifting massive mauls using a single hand.

TzHaar eggs can be seen incubating in the lava throughout the inner city.

Strangely, they are born from eggs, which are incubated in birthing pools of molten lava throughout the inner city. The TzHaar have the unique ability of memory transfer; a TzHaar will retain all of the knowledge and memories its ancestors had before it. This generally makes the TzHaar a very wise race. The deeper the egg is placed in the lava, the more memories they would absorb. This however, has lead to the birth of feral monsters which remain trapped within the Inferno, an ancient incubation chamber.

TzHaar live very long lives, although the exact length is unknown. As they grow older, their bodies begin to lose heat and solidification begins. They are able to delay this process by resting in terminal chambers, where they draw warmth from the volcano.

A Haar-Tok, a former TzHaar that has cooled to rock form in old age.

Even stranger than their birth is their death. When the TzHaar die, their bodies harden and lose all mobility, becoming Haar-Tok. Yet, even as their bodies fail, their minds remain eternally locked within their corpses, which are often displayed in a statue-like state or broken down into the holy currency known as Tokkul.

The most important part of TzHaar society is its caste system, which dictates what a TzHaar will do in life. At birth a TzHaar's caste is chosen based on their physical and mental traits, and they strictly follow this for the rest of their life.

The caste operates on four types; the TzHaar-Ket, the TzHaar-Xil, the TzHaar-Mej, and the TzHaar-Hur. Unlike many caste systems, each of the TzHaar castes is considered equal in power and respectability, but differs in its role in society. By dividing themselves, the TzHaar are able to effectively manage their people and retain a power balance.

In combat they use weapons such as Tzhaar-ket-om and Tzhaar-ket-em and protect themselves with Toktz-ket-xil. If ever their city were threatened, the TzHaar-Ket would be the first to defend it.

The TzHaar-Xil are the hunting class, being agile, yet adept in combat. They attack with ranged and melee attacks. The melee version attack with the Toktz-xil-ak and the rangers attack with Toktz-xil-ul.

The TzHaar-Mej are the mystic class of the TzHaar, although they are also the city's leading and governing class. Whether or not a single TzHaar rules is unclear, and it is possible that all TzHaar-Mej are part of a council.

As mystics, the TzHaar-Mej are generally the wisest. They are capable of defeating their opponents with magics , wielding an obsidian staff known as a Toktz-mej-tal.

The TzHaar-Hur are the craftsman class of the TzHaar. If pressed to combat, the TzHaar-Hur use only their fists, but would call other TzHaar to their aid.

Despite their lack of combat ability, the TzHaar-Hur are incredibly important to the TzHaar, and are capable of forging weaponry from obsidian found in the volcano.

Very little is known of the TzHaar's early history. They believe that "They were born on the day volcano shook foundation of earth." This would suggest they were born some time during the First Age. Others believe the TzHaar may be a remnant from an age in Gielinor that predates even Guthix's arrival. While the origins of the Tzhaar race are unknown to the "Old School" universe, it is confirmed that the Tzhaar and sub-races were created by Ful in RuneScape. However, since Old School RuneScape and RuneScape are separate titles, the current holes in the "Old School" lore may choose to deviate from this.

The TzHaar lived for thousands of years beneath the holy fires of the volcano, lasting out the Second Age and cataclysmic God Wars with little surface contact. For millennia they carved a great city from the living earth, entering an age of prosperity with no war, crime, or concept of evil.

Some of the TzHaar, who were patiently awaiting orders from their creators, saw Gielinor in turmoil. These TzHaar left Mor Ul Rek for Mount Karuulm, a volcano far west, calling themselves the Tasakaal. The Tasakaal obtained their own servants, called the Kahlith, former humans who devoted their lives to maintaining the balance.

In the year 169 of the Fifth Age, a more continuous stream of contact was established between the TzHaar and the outside world. The TzHaar remain cautious of humans, and most of their city still remains off-limits to outsiders, only allowing those who they deem worthy to enter their inner city. 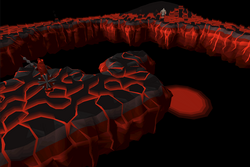 The large sinkhole in the centre of Mor Ul Rek, which used to be a large pool of lava where the TzHaar placed their eggs.

Mor Ul Rek used to have a very large incubation chamber in the centre of the city. Following TzHaar biology, as they gain memories of their ancestors while in the lava, the TzHaar realized that the deeper the egg was placed in the lava, the more memories they would absorb. They continued to repeat this process to gain ancient knowledge, though they eventually drained the chamber of all lava, creating a large sinkhole that revealed the Inferno, an ancient incubation chamber.

Wanting to uncover more of their ancestors' memories, the TzHaar decided to place eggs in there. The result was that the hatched eggs became feral monsters (referred to as Jal by the TzHaar) who fought each other for dominance. These feral TzHaar are very intimidating and much more powerful than their current counterparts; even the stronger TzHaar-Ket are hesitant to challenge them. One of these, TzKal-Zuk, grew more powerful than the others and eventually controlled the Jal, with the TzHaar offering it sacrifices to keep it at bay, fearing that it would attempt to escape to the surface to obtain memories beyond the Inferno. Some of the TzHaar sponsored JalYt challengers to attempt the Inferno, hoping that their "foreign" equipment would allow them to succeed where they could not.

Fortunately, most TzHaar are willing to speak the human language, although a basic understanding of certain words is helpful when visiting the city.

The language doesn't work in the same way as human languages, so it's more about the emotion and passion behind the word rather than the literal translation. Most of the current knowledge consists of nouns, adjectives, and an extremely limited selection of verbs.

Most of these words are taken from RuneScape's TzHaar Tourist Guide or other texts from RuneScape, which Old School Jagex Moderators have used in TzHaar related content.

TzHaar religion is a mystery. Some believe they follow an ancient god, who created the volcano. This has not been confirmed in Old School RuneScape, but is confirmed in the RuneScape lore of the Tzhaar, with this god being Ful.

The TzHaar believe that, when they die, their souls will eventually be brought to the heart of the volcano and given new life. TzHaar prophecy says that one day their race will draw to an end. The volcano will sink back into the earth, and the cold seas will flood their city, bringing an end to their people forever.