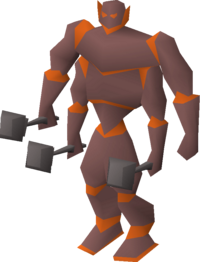 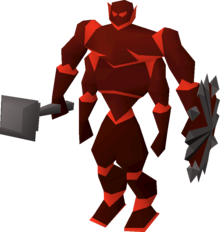 The TzHaar-Ket are inhabitants of Mor Ul Rek. Some of them can be found wielding a Tzhaar-ket-om. Some will have no weapon wielded, while some wield up to three Tzhaar-ket-em to accompany, or a Toktz-ket-xil.

You can safespot the TzHaar-Ket by standing behind a sulphur vent south-west of the entrance of Mor Ul Rek using range or magic.

There are stronger TzHaar-Ket located in the inner area of the city which drop pieces of the obsidian armour set. In order to fight these, a fire cape must be shown to any TzHaar-Ket guard near the barrier (these guards are unattackable).

Drop rates estimated based on 860,400 kills from the Drop Rate Project, unless otherwise cited.

Drop rates estimated based on 6,514,000 kills from the Drop Rate Project, unless otherwise cited.