TzHaar-Ket-Rak's Challenges is a solo combat minigame in the inner area of Mor Ul Rek, located within the Karamja volcano. Offspring of TzTok-Jad, JalTok-Jads have been increasing in numbers, and TzHaar-Ket-Rak, a TzHaar warrior, is tasked with reducing their numbers. He can give out challenges to players to deal with the JalTok-Jad. 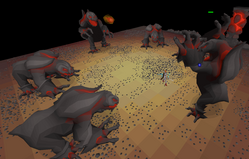 Players who accept the challenge will face an increasing number of JalTok-Jads per challenge. The first challenge has players fight one, which then unlocks the next challenge, until players face six simultaneously. The first two challenges are available for anyone who is able to enter the inner area of Mor Ul Rek; the next challenges require players to have completed the Inferno at least once. There is also a final challenge where players face an unlimited numbers of JalTok-Jads, in which when one of them dies, another spawns in place of it, until the player is defeated.

Completing a challenge will reward TokKul, with the player's best completion times tracked on a scoreboard nearby. Players who complete all six challenges will unlock a transmogrify option for a pet TzRek-Jad, turning it into JalRek-Jad.