The TzHaar Fight Pit is a safe minigame in which players fight against each other in a free-for-all arena. The winner is crowned champion as long as they are both still in the arena and have not been killed yet. Since killing someone ejects them out of the arena and into the waiting area, the first rule is all one needs to remember.

The waiting room is little more than a small enclosure. Here, players wait for the next game, converse, watch the current game, or form teams.

Inside the waiting room is a small pillar. By clicking it, players can view various areas of the gameplay area.

The rules of the Fight Pits are simple: the last man standing, wins. Winners will receive a red skull icon above their head, signifying them as the winner.

The winner can either re-enter the waiting room and collect a reward of Tokkul, or they can wait in the gameplay area for the next game to begin.

The Fight Pits is an 'anything goes' minigame: any weapon or armour type can be used. This makes the game very popular for high-levelled players wearing Barrows armour or using Ancient Magicks.

After a certain amount of time, waves of various Tzhaar creatures will appear and attack remaining players. These waves consist of Tz-Kih (level 22), Tz-Kek (level 45), and Tok-Xil (level 90), If the fight takes even longer, the player will receive 1 damage for every game tick (600ms). 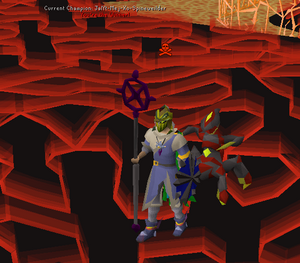 The last player standing is rewarded with Tokkul, the currency of the TzHaar, and a red skull (

) above their head not unlike the PKer's skull. The amount of Tokkul varies, based on the combined combat levels of the players the winner defeated. (Their own level is not included) Anyone who walks out during a game is also not included.

Tokkul can be redeemed at many different Tzhaar shops around the city.

The red skull will signify to all others that they are the champion of the Fight Pits. It will remain above the player's head for 1 hour, but the following will cause it to disappear:

It is possible for multiple players to have the red skull on a single world, although only the most previous winner will have their name displayed as the champion in the Fight Pits.

Becoming champion is also one of the Hard level Karamja Diary tasks.