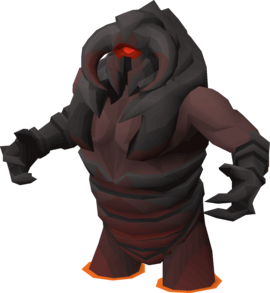 Players can pay 100 slayer reward points to have Duradel or Nieve assign TzHaar as a slayer assignment. When players have TzHaar as a slayer task, they will be prompted with an option to be assigned 1 TzTok-Jad or 1 TzKal-Zuk; the latter requires having killed TzKal-Zuk at least once before being able to have him assigned. Players who succeed in defeating it on task will receive 101,890 Slayer experience, for a total of ~125,000 Slayer experience with the experience gained from the waves.

Sometime prior to the Fifth Age, TzKal-Zuk was imprisoned behind the Ancestral Glyph within the Inferno.

During the Fifth Age[confirmation needed], the TzHaar in Mor Ul Rek sought to increase the depth in which they incubated their eggs in order to have newly hatched TzHaar gain distant memories of their ancestors.[1][2] However, when they attempted to incubate their eggs deeper and deeper within the birthing pool,[3] it collapsed and the Inferno was discovered by the TzHaar, which they believed to be an ancient incubation chamber.[4] Deciding to test the chamber, the TzHaar took eggs from creatures in the Fight Cave,[5] only to realise that they became feral and much more powerful.[6] 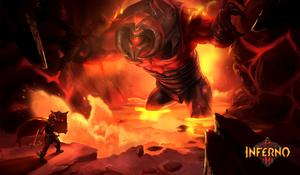 A piece of artwork depicting a player facing TzKal-Zuk.

Zuk, imprisoned within, manages to gain control over the feral TzHaar.[7] Unable to keep the threat under control, the TzHaar seek adventurers to reduce the number of offspring within the Inferno.[8][9] Adventurers who have battled through many waves of them will witness the breaking down of TzKal-Zuk's prison, and must battle with him.[10]

As TzKal-Zuk is isolated from the platform the player is on, it cannot be attacked with melee. Only ranged or magic attacks will be able to reach it.

The twisted bow is the most effective weapon to use against Zuk, followed by the Bow of Faerdhinen. The toxic blowpipe is also recommended for killing the Jal-Xil and Jal-MejJaks that appear during the fight.

During the fight, a shield will appear to protect the player from Zuk's attacks. The shield has 600 hitpoints and will move, so players will need to move alongside it to avoid taking damage from Zuk. If the player does not get behind the shield when Zuk attacks, they run the risk of taking massive damage from its attacks. It is possible for Zuk's attacks to miss or deal survivable damage, though this cannot be relied on. Tick eating does not work against Zuk. The toxic blowpipe's short range may lure the player out of the shield's protection when attacking a monster, so caution should be exercised when wielding it.

In addition to this, a Jal-Xil (ranger) and Jal-Zek (mager) will appear periodically throughout the fight and attack the shield. It is imperative to keep them off the shield: if the shield is destroyed, the player's chances of survival are essentially zero. Pray accordingly against the two and focus on Zuk once both minions are killed.

When Zuk reaches 480 hitpoints, a JalTok-Jad will appear and attack the shield. Tag and kill it immediately as leaving it alive can be problematic, especially when more Jal-Xil and Jal-Zeks reappear.

At 240 hitpoints, Zuk will attack faster and 4 Jal-MejJaks (healers) will appear from the lava and start healing Zuk. The healers will heal about 25 hitpoints on average, and will quickly heal Zuk if not attacked. Once attacked, the healer will attack the area in front of it, dealing 7–10 damage with their area-of-effect attacks. Kill the healers before focusing on Zuk again. It is best to wait for the Jal-Xil and Jal-Zek to respawn again before triggering the appearance of the healers to kill them without much inconvenience. The toxic blowpipe is the strongest weapon against the healers.

Any remaining minions when TzKal-Zuk is killed will automatically die with it.

Should players manage to defeat TzKal-Zuk, they will be awarded the untradeable infernal cape, which is the best melee cape in the game, along with 16,440 Tokkul (doubled if the player has completed the Elite tier of the Karamja Diary).