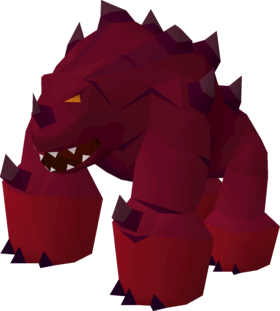 TzTok-Jad, commonly called Jad for short, is one of the strongest monsters in Old School RuneScape and the boss of the TzHaar Fight Cave minigame. With a combat level of 702, TzTok-Jad has a max hit of 97 and can easily kill most players in one hit with any of its three attacks: a Melee attack with its bite (max hit of 97), a blast of Magic in the form of a fireball (max hit of 95), and a boulder falling from the ceiling as a Ranged attack (max hit of 97). To add to the challenge, players must fight through waves of monsters in the TzHaar Fight Cave in order to reach TzTok-Jad and must do so solo and without being able to restock on supplies from the previous waves.

Players can pay 100 slayer reward points to have Duradel, Nieve, or Chaeldar assign TzHaar as a possible Slayer task. When players receive TzHaar as a slayer assignment, they will be prompted with an option to be assigned 1 TzTok-Jad instead.

This gives players the option to use their imbued black mask/slayer helm's damage and accuracy bonuses on all monsters encountered in the Fight Cave. Players who accept this challenge will receive Slayer experience for each of the monsters in the Fight Cave that they defeat, as well as 25,250 Slayer experience should they defeat TzTok-Jad himself, totalling 37,010 xp for the entire cave.

If the player is to leave the Fight Cave during their task, either manually or by dying, they will receive the following message: You no longer have a slayer task as you left the fight cave. This will not reset a player's task streak, and can be used as a way to quickly skip the task without the use of slayer points. 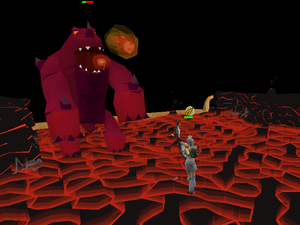 TzTok-Jad is the boss monster of the TzHaar Fight Cave, and is encountered on Wave 63 (the final wave). This is the only place where Jad can be found.

Once TzTok-Jad is reached, fighting and defeating him requires decent skill and reflexes. It is possible to engage TzTok-Jad using Melee, but it is more difficult to switch between the Protect from Melee, Protect from Missiles, and Protect from Magic prayers. TzTok-Jad only uses Ranged and Magic attacks at a distance, however. As he is resistant to Magic, using Ranged to attack him is recommended.

TzTok-Jad has a very long attack range, much like the Tok-Xil encountered earlier on in the Fight Cave. A very useful tip is to try to find out where the orange Ket-Zek spawned in the previous wave. As with all other waves where two enemies of the same type are encountered, the new monster will appear where the off-coloured monster spawned. This will allow you to prepare accordingly to prevent Jad from launching a surprise attack.

TzTok-Jad will use attacks at random. It is critical that players know the warning signs for these attacks and switch between the protection prayers accordingly before the attack launches:

All of TzTok-Jad's attacks can deal up to 97 damage. While this means Vengeance can deal a lot of damage, one extremely high-damaging hit can mean the fight is over, especially if the Yt-HurKots are also attacking you.

Monsters move east or west before moving north or south to reach you. This is very useful when trying to trap TzTok-Jad when it spawns.

Once TzTok-Jad is reduced to below 150 health, he will summon four Yt-HurKots to come and heal him repeatedly — the player must deal with them whilst warding off TzTok-Jad's attacks. If they manage to heal him to full health, then they should not be killed as they will respawn once he is reduced to half health again. If they are distracted before healing him to full health, they will not respawn when killed.

Note: If you take the attention of the Yt-HurKots and they are hitting you, they WILL still heal Jad if they are close enough to him.

Once players manage to defeat TzTok-Jad, they will be rewarded with the coveted fire cape along with 8,032 Tokkul (16,064 Tokkul with completion of the Elite Karamja Diary).

Players may exchange any unwanted fire capes with TzHaar-Mej-Jal for their choice of 8,000 Tokkul or a second chance at Tzrek-jad, having the same reward rate as killing Jad without a Slayer task (1/200).