Jad slams his feet to the ground for Ranged, and he rears up dangling his feet for Magic.
Main article: TzTok-Jad

If one is successful in defeating TzTok-Jad, they receive 8,032 Tokkul and the fire cape. This cape has an animated "lava" pattern. The animation shows lava flowing downwards continually. The fire cape is considered one of the best capes in RuneScape. It provides much more protection than the cape of legends and the obsidian cape, as well as slight offensive bonuses. It is not tradeable. The only capes better in any area are the infernal cape which provides all-around superior stats, the god capes which provide a higher magic attack bonus, Ava's attractor, accumulator or assembler for a higher ranged attack bonus, the Ardougne cloak for prayer and offensive stab bonuses, and the Mythical cape for a higher offensive crush bonus. A max cape also provides a plethora of useful perks albeit having the stats of a regular trimmed skill cape.

Previously, if a player defeated TzTok-Jad after obtaining a fire cape, the player would receive 16,064 TokKul and nothing else, which was highly inadvisable due to the high cost of each trip. However, after an update, the fire cape became a stackable item when placed in a player's bank, allowing players to receive another fire cape. 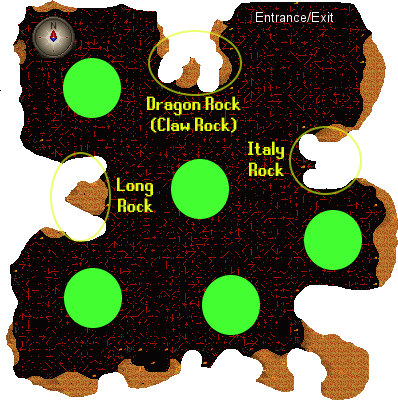 One of the main safespots is Italy Rock which is located on the eastern side of the arena. Standing directly on the western or southern wall of Italy Rock will make the level 45 Tz-Kek and level 180 Yt-MejKot stuck on the corners. Italy Rock is a great location to camp during waves where you encounter those monsters.

The player here is standing on the western side of Italy Rock, keeping the Tz-Keks stuck on the corners.

Note: As of the update on 20 August 2015, there are no longer static spawns in the fight caves. However, there is still a pattern to let you predict spawn points, although not quite as easy to remember. When entering the caves, the game chooses a random spot in the following cycle: SE, SW, C, NW, SW, SE, S, NW, C, SE, SW, S, NW, C, S. At the start of each wave, move the spot one forward, wrapping if necessary. The game then spawns the monsters in descending combat level order, starting from that spot. Using this information you can position yourself for each new wave to do it as effectively as possible. When it comes down to the TzTok-Jad spawn, he will spawn where the off-coloured 360 was on the previous wave; this is the same location as the first 45 spawn. To better determine where the spawn points are, see Rotations.