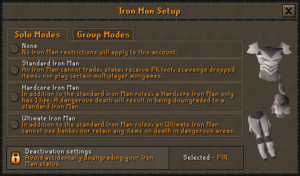 Players may also choose to permanently stay an Ironman by talking to the Iron Man tutor in Lumbridge. After the update of 11 January 2018, new accounts must have a skill total level of 1,000 to set permanent Ironman status.

standard ironman. In addition, their experience and total level on the Hardcore Ironman HiScores table will be locked, with their name slashed across like this.

For hardcore group ironman only, there is only ONE safe PvM death per player. The group has a shared pool of 1 life per player; for example, a group of 3 players shares 3 lives between them and will lose Hardcore status after losing the third life. Lives can be lost by any player, and multiple lives can be lost by a single player.

Additionally, deaths that would normally be considered "safe" for solo hardcore ironmen are NOT safe for group hardcore ironmen. This means that each death in minigames such as Barbarian Assault, TzHaar Fight Cave, or Chambers of Xeric will result in a loss of a life for the group. The only exception to this is the Fremennik Trials fight with Koschei the Deathless (4th phase). Hardcore group ironmen should take extra care to use the exit potion when leaving the Nightmare Zone, since dying will result in the loss of a life for the group. They should also use extra caution in minigames such as Pest Control as other players can provoke monsters such as splatters and cause them to detonate close to you.

Ultimate Ironmen have the following restrictions, in addition to the standard restrictions given to all ironmen: