Runecraft training provides valuable runes, which can be used for various spells or sold for profit. Training the skill is also very useful for getting wrath runes for Prayer and Slayer training. Most Runecraft training methods require a lot of inventory space and are safe, so players are advised to store their items at an Item Retrieval Service for more inventory space.

Essence pouches can be obtained by killing abyssal leeches near the Fairy ring ALR. The small pouch can be obtained for free from the Dark Mage, either by talking to him in the Abyss or via NPC Contact.

The essence pouches will decay after use. To quickly repair them, the player will need to contact the Dark Mage via NPC Contact on the Lunar spellbook. Having the rune pouch is strongly recommended to save inventory space when doing this.

The Raiments of the Eye outfit grants 60% more runes when worn. The outfit can be stored in the player-owned house, and is recommended to get as early as possible for extra profit.

Certain methods involve using pure essence. Pure essence can be passively obtained from Slayer training, Chambers of Xeric, Zulrah, or Zalcano. Temple Trekking and Soul Wars are the fastest ways to get pure essence in real time, both offering around 10,000–12,000 essence per hour. Daeyalt essence is not worth gathering on an Ultimate Ironman, as the player would have to exchange the shards into essence at the daeyalt essence mine after every runecrafting lap. This makes processing daeyalt essence much slower than on other account types, and thus gathering it is not recommended.

Many Runecraft training methods, such as finding books at the Arceuus Library (see below) scale their experience gains based on the player's current Runecraft level. For this reason, it is usually recommended to get some quick, early levels by doing quests that reward Runecraft experience.

Other quests such as The Slug Menace, What Lies Below, and Devious Minds also give Runecraft experience, but have some Runecraft skill requirements of their own.

The Guardians of the Rift minigame is the most efficient way to train Runecraft on an Ultimate Ironman. In addition to Runecraft experience, the minigame also offers passive Mining and Crafting experience. The minigame is profitable and offers useful rewards, such as the colossal pouch for holding more essence and Raiments of the Eye set for crafting extra runes. The minigame is also safe, so players advised to store their items at an Item Retrieval Service for more inventory space.

To participate in the minigame, players must have completed Temple of the Eye. The experience gained from completing the quest is enough to get the player from level 10 to 27, which is required for the minigame. There are also a number of quests that are very useful to have completed, which are listed below.

For the fastest experience, players should use the best pickaxe and all essence pouches available. The rune pouch is strongly recommended to save inventory space. Players who do not have the Raiments of the Eye outfit yet are advised to wear any tier of the Varrock armour to have a 10% chance to mine double guardian fragments at once. Players may also make use of the celestial ring if they have it.

Players who have the abyssal lantern should light it with redwood logs if possible. This makes it so the player does not need to repair essence pouches via NPC Contact, which would give more space for keeping valuable runes. Players who cannot use redwood logs or are wearing the Runecraft cape are advised to use yew logs for the point boost it provides.

Through Guardians of the Rift players can obtain the Raiments of the Eye set. It provides 10% more runes per piece worn, for a total of 60% when wearing a full set. The outfit can be stored in the magic wardrobe in the player-owned house. The abyssal needle is used to combine essence pouches into the colossal pouch. It can hold up to 40 essence, making it the best essence pouch to use. Valuable runes obtained through the minigame can be kept for later use or sold to Ali Morrisane for profit.

Experience rates are shown in the table below. The rates assume using all pouches available. From level 85 onwards, the rates assume doing the minigame in small coordinated teams for faster experience.

From level 77 onwards the player can train Runecraft in Arceuus by crafting blood runes at level 77, or soul runes at level 90. It requires significantly less attention compared to other methods, and also provides some passive Mining and Crafting experience. Both methods are also profitable; blood runes offer better profit but slower experience, soul runes offer faster experience but are much less profitable.

Players will need to have 100% Arceuus favour, a chisel (can be obtained at the runestone mine), and a pickaxe of any kind for this method. The type of pickaxe does not matter for mining dense essence blocks. It is also strongly recommended to have a high Agility level (78+ recommended) and the graceful outfit for faster run energy restoration. Level 73 Agility is required for the western rock scramble shortcut.

Completion of the medium Kourend & Kebos Diary will grant the player 5% chance to mine 2 dense essence blocks at once (but no additional crafting/mining experience is gained), which increases overall experience rates slightly. Players that have completed the elite tasks of the Kourend & Kebos diary will receive 10% additional blood runes, however no extra experience is given. A higher Mining level is also slightly helpful, as the essence stone depletes less frequently with a higher Mining level. The dragon or crystal pickaxe special attack can be used to boost the Mining level.

Wearing a ring of endurance with at least 500 charges is recommended should the player have one. The charged ring will reduce run energy drain, and without one it is possible to run out of run energy even at high Agility levels.

Blood runes are needed for barrage spells and they are very expensive when bought from a magic shop, so it is best to keep the runes for barrage Slayer. A lot of blood runes are also needed to use sanguinesti staff and scythe of vitur for high-level bossing. Soul runes generally do not have a lot of uses other than casting Blood Barrage when killing God Wars Dungeon bosses, so it is recommended to sell them.

For crafting blood runes, run a few steps west of the Dark Altar, then click on the other side of the fence as shown above. This will get you around 2/3rds of the way to the Blood Altar without clicking again.

Players should store their items at an Item Retrieval Service to have a full inventory for the essence blocks. This method is safe, except for players with very low combat level and Hitpoints. Very low-levelled players should be careful and pay attention when running past aggressive skeletons.

It is worthwhile to sacrifice three inventory spaces for fletching broad arrows or headless arrows while running to the altar. While this lowers experience rates for Runecraft, it makes fletching more efficient. 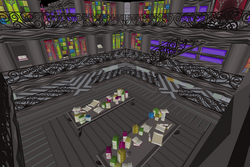 A player on the top floor of the library.

Helping customers in the Arceuus Library is another alternative Runecraft training method for Ultimate Ironmen. This method does not have any requirements and can be started at any Runecraft level. However, it is strongly recommended to complete quests to gain some levels beforehand, as each book of arcane knowledge gives 4 times the player's Runecraft level in experience, and this linear scaling has a much greater impact on experience rates at lower levels than higher. For example, at level 1 the player would only gain 4 experience per book, whereas at level 10 the player would gain 40 experience per book.

Players will need to have a relatively empty inventory to have space for the books. Having at least 16 inventory slots open for the books and dark manuscripts is optimal. This method is safe, so players can store their items at an Item Retrieval Service for more inventory space. It is recommended to have a fairly high Agility level and full graceful outfit for faster run energy restoration. Having stamina potions is strongly recommended if the player plans to do this method for a long period of time, as this allows for much faster fetching of the books and thus increases experience a lot. This method is viable without stamina potions, however the experience rates will be lower.

Wearing a ring of endurance with at least 500 charges is recommended should the player have one. This will reduce run energy drain, and make it so the player would have to unnote stamina potions less often.

If the player is not using stamina potions, they can alternatively recharge run energy by using a Revitalisation pool or higher and teleporting back using Arceuus Library Teleport. Vile Vigour can also be utilized to restore run energy if using a Rejuvenation pool or higher. If no poh pool is ownned, players can use Ardougne cloak 1 to teleport to the Ardougne Monastery to restore prayer, then use Vile Vigour to restore run energy. A prayer level of at least 50 is reccomended so that it only takes 2 casts to go from 0 to 100 run energy, then refilling prayer to full before returning to the library using Arceuus Library Teleport for an extra cast while collecting books. Note that Vile Vigour has a cool down of 10 seconds, so it is only worth the wait if player have a relitivily high prayer level. Additionally, run energy can also be saved by using Arceuus Library Teleport at places far away from the book turn in, such as the center-middle book spots.

The method goes as follows:

While this method is viable up to level 99, players may want to switch to crafting blood runes at level 77, or soul runes at level 90. Crafting blood/soul runes in Arceuus is profitable, requires a lot less effort, does not require using stamina potions, and is only slightly slower. However, this method does not require a whole inventory, so players are easily able to train Farming and do bird house runs.

At level 95 and after completing Dragon Slayer II, players can craft wrath runes. They are used for casting offering spells to train Prayer. Wrath runes are dropped by monsters in relatively small quantities, so crafting the runes is generally the best way to get them.

To access the Wrath Altar, players will need to wear the Runecraft cape or get a wrath talisman dropped by Vorkath, and uncommonly by adamant and rune dragons. Players can also use a catalytic talisman or tiara, or an attuned Hat of the eye. Players will also need a lot of noted pure essence, which can be obtained through training Slayer. For the fastest rates, players will also need to get all the essence pouches for carrying more pure essence per lap. Having the ornate rejuvenation pool in the player-owned house is also recommended for restoring Hitpoints and run energy.

This method is potentially dangerous, as players will need to run past high-level dragons. It is strongly recommended not to store items at an Item Retrieval Service, as it is very possible to die to an untimely disconnection.