Ultimate Ironman players often find themselves in need of restoring various stats such as Run energy, Hitpoints, Prayer points, Poison status, Special attack energy and various lowered stats such as Attack or Agility during various Slayer or Bossing activities like Barrows. Clan wars teleport via Ring of dueling or Grouping teleport is a good way to restore stats as an early/mid level UIM. Due to needing to craft a new ring every 8 teleports, players may opt to hold a few in their inventory depending on what they are training, and if far enough may store extra ones in an Item Retrieval Service. Explorer's ring is a good unlock that will recover run energy a limited amount of times per day depending on which level of the Lumbridge diary the player has done. At level 81 Construction players may build the Basic jewellery box, providing the player unlimited Ring of dueling charges, this can be achieved earlier by boosting Construction. The best method for stat restoration is the Ornate rejuvenation pool, requiring 90 Construction. This will allow players to restore Hitpoints, special attack, run energy, Prayer points, and any reduced stats, as well as curing venom, disease, and poison in their Player-owned house. 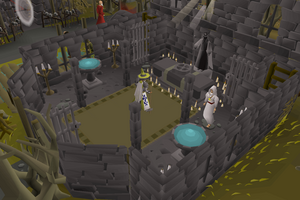 The pools of refreshment in the chapel in Ferox Enclave.

Accessing Ferox Enclave is still a viable option for an Ultimate Ironman by using the Clan Wars or Last Man Standing minigame teleport, which allows the player to teleport directly to Ferox Enclave with a 20 minute cooldown. If your activity works out to not need stat restoration more frequently than 20 minutes, and does not involve utilizing the Minigame Teleport for some other purpose, such as bossing at Barrows, this teleport is highly effective.

Other methods of accessing Ferox Enclave include using a canoe (requires level 57 Woodcutting), or the ring of dueling teleport.

To utilise the stat restoration from Ferox Enclave, simply drink from a Pool of Refreshment in the chapel found in the north-western part of the town. This will replenish all lowered stats, health, prayer points, run energy and negative status effects such as poison.

Many Ultimate Ironmen complete the Ardougne easy Achievement Diary for the Ardougne cloak, which gives unlimited teleports to the Ardougne Monastery. Many players use this to easily access the Fairy rings system and Spirit tree network, and therefore frequently carry or wear the Dramen staff.

If the player needs to restore their stats more frequently than the Grouping teleport timer allows, the player can easily run from the Ardougne Monastery to Nightmare Zone and use the Dream option on Dominic Onion and enter any practice dream, and immediately leave the dream. Upon leaving the dream, the player's stats will have been restored.

51 Magic) and going down the ladders and walking to Nightmare Zone.

Using the Flame pit in the Player-owned house is a way to restore stats by dying, since dying in a Player owned House is a safe death. This method also removes the PK skull.

Because the player must buy the Throne room, Oubliette, and Flame pit this method requires 425,000 and 69 Construction, using the +3 Crystal saw and +5 Spicy stew Construction boost for the 77 Construction requirement. This is considered an alternative to the Ornate rejuvenation pool. Since it requires 87 herblore which can be boosted from 82. This a popular mid level approach to doing Zulrah.