Thieving training on an Ultimate Ironman is relatively similar to that for regular accounts. Most training methods require few items and little preparation to do effectively. This also makes the skill easy to train in conjunction with other inventory-stressful skills, most notably Farming. As a skill, Thieving is most useful as a source of coins and seeds through pickpocketing, as well as the Pharaoh's sceptre from Pyramid Plunder.

There are a number of items that can be useful for Thieving training, most notably the Rogue equipment set, which doubles all loot from pickpocketing NPCs. It is highly recommended to get the set before training Thieving much past level 50, though it may be useful to wait until a high Construction level for access to easier storage in the player-owned house armour case. The Ardougne Diary also gives bonuses when pickpocketing NPCs, making them less likely to notice the player's attempts.

From level 1 to 5, the only viable option is to pickpocket men or women around RuneScape. Low-level players who do not have many items on them and have their respawn point in Lumbridge do not need food for this, as they can pickpocket men/women around the Lumbridge Castle and simply let them kill you. Acquiring level 5 Thieving from pickpocketing men and women takes 49 successful pickpockets. Draynor Village has a house right by the Agility Course that has a man that you’re able to pickpocket while trapping him with the door closed, preventing him from moving away from you. 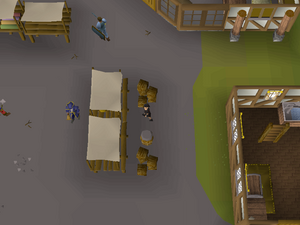 Safespot for the cake stall in East Ardougne.

From level 5 to 25, the fastest experience is gained by stealing from bakery stalls in East Ardougne market or in the courtyard outside Kourend Castle. There is a safespot from the guards in East Ardougne, simply stand under the baker to the cake stall further east and the guards cannot spot you. The cake stall in the Kourend Castle courtyard also has a safespot where you cannot be spotted (unless a guard accidentally walks back there, which does not happen often) when stealing from behind it. Players can gain up to 19,200 experience per hour if dropping everything.

Even though the tea stall in Varrock is available at this level, it is significantly worse than cake stalls due to slower respawn.

Stealing from fruit stalls in Hosidius offers the fastest experience from level 25 to 45. This requires 15% favour in Hosidius and gives 28.5 experience per fruit. The best place to do this is in the easternmost house near the beach (see the picture), which has 2 stalls close to each other and no guard dogs patrolling nearby. Steal from both stalls as fast as possible and drop the fruit while running between them, eat the strange fruits you get or use stamina potions to replenish run energy. Alternatively, you can steal only from one stall which is easier and does not require running.

Blackjacking bandits in Pollnivneach offers the fastest Thieving experience from level 45 onwards. While there are three different types of bandits the player can blackjack, the method is the same for all of them: knock out the bandit and pickpocket them twice while they are unconscious. If the player fails to knock out the bandit, they will hit the player for 4 Hitpoints and become aggressive. To counteract this, after failing the knock-out, quickly pickpocket the bandit with a full inventory before their first attack. This renders them unaggressive and the player may safely attempt another knock-out. Using healing items that leave behind another item after using allows keeping inventory full for this method to continue working.

For blackjacking, players must have completed The Feud quest and have a blackjack of any kind. The type of blackjack does not matter for blackjacking. Getting full rogue equipment at level 50 is recommended for double loot per pickpocket, though this does not increase experience rates.

The nearby bar sells wines which can be useful as a cheap source of healing and help keep inventory full. High-level players are advised to use Saradomin brews as they heal much more per inventory slot, allowing the player to sustain much longer before restocking. Vial smashing can be disabled so that inventory remains full. Wearing the Hitpoints cape is recommended for faster health regeneration if the player has one.

Experience rates are shown in the table below. The rates vary depending on performance and the type of food used.

At higher levels, training with blackjacking does not require much inventory space to do. It is an excellent skill to pair with Farming training, which often fills the inventory with a variety of seeds and produce.

Stealing artefacts in Port Piscarilius is a feasible alternative for players who prefer something less click-intensive, or for players who want to train Thieving while doing actions that can be done while moving. Such actions include blowing molten glass, fletching ammo, cutting gems, and burning logs.

Players must have 75% favour in Port Piscarilius for this activity. Since this method involves constant running, players will need to use stamina potions to restore run energy. Having the graceful outfit and the ring of endurance is recommended. Alternatively, players can teleport to their house and use a revitalisation pool or higher to refill run energy, although this will lower experience rates slightly.

It is also strongly recommended to have completed A Kingdom Divided for the book of the dead, which offers a quick teleport to Port Piscarilius via The fisher's flute option. Using this teleport to get closer to the houses will increase experience rates notably. Kharedst's memoirs can also be used, but it holds fewer charges. The book can be recharged by inspecting the Old Memorial north of Land's End. Players can get there using the Rada's blessing teleport to the Kourend Woodland, or the Xeric's talisman teleport to Xeric's Lookout. Each charge requires 1 law, 1 soul, 1 mind, and 1 body rune.

Each successful heist yields Thieving experience and 500–1,000 coins. Getting caught will lower experience rates fairly notably, so it is usually better to wait for an opportune moment to sneak past the patrollers than risk getting caught.

Experience rates are shown in the table below. With good practice and when using stamina potions, it is possible to steal up to 55 artefacts per hour.

If the player is not going to train another skill whilst stealing artefacts (such as glassblowing), this method does not require much inventory space. This makes it a good method to pair with Farming training, which often fills the inventory with a variety of seeds and produce. 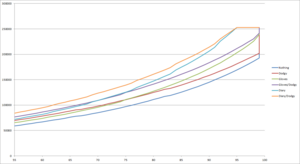 Pickpocketing Knights of Ardougne is an easier and slightly more profitable, but slower alternative to blackjacking. However, this method is quite slow at lower levels, so players may want to consider using faster methods until around level 80–90 Thieving. Completion of the medium Ardougne Diary is strongly recommended for the increased pickpocket success rate.

Training on Knights of Ardougne requires almost no inventory space to do. This makes it an excellent method to pair with Farming training, which often fills the inventory with a variety of seeds and produce.

Pyramid Plunder is not generally recommended for Ultimate Ironman players due to its resource and inventory requirements. Ultimate Ironmen usually opt to train at Pyramid Plunder only to get the Pharaoh's sceptre for making an ancient or an occult altar in the player-owned house. A second sceptre can be stored in a STASH deep in the pyramid for a master level emote clue. It is, however, one of the fastest methods of training Thieving from level 91 onward.

At level 94 and with the hard Ardougne Diary completed, players can pickpocket Master Farmers at a 100% success rate. Master Farmers are a decent source of herb seeds for Herblore training, providing up to 70,000 Herblore experience worth of herb seeds per hour when wearing the rogue equipment. Even though Master Farmers become available at level 38, pickpocketing them at lower levels is not recommended, as players will fail very often and will need a lot of food to heal themselves. If the player has not completed the Ardougne hard diary, wearing the Thieving cape is required for 100% pickpocketing success rate.

The best location to pickpocket a Master Farmer is northern part of Hosidius. One can be easily trapped inside the building next to the cow pen. Players who do not have the 100% success rate are advised to pickpocket the Master Farmer in Draynor Village, which puts the player close to Fortunato and his shop, which sells cheap wine for healing. The Master Farmer north of Ardougne does not benefit from the medium Ardougne Diary bonus, as he is considered to be outside of the city.