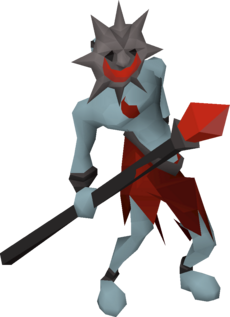 Undead Druids are followers of Ranul, the god of the moon, who have become corrupted and undead. They can be found in various sections of the Forthos Dungeon: the Crypt of the Moon east of the western dungeon entrance, the Temple Library (which has a nearby altar where players can recharge prayer) and the small chamber south of the Spider Den near Brother Aimeri, which requires a knife or slash weapon to access.

While not in melee range, they will only attack with their magic attack. Players can avoid damage entirely by praying against magic attacks.

An effective setup for fighting Undead Druids is to use Void ranger armour with a salve amulet(ei) while praying against magic.

As undead druids are undead, a Salve amulet(ei) (or simply the regular enchanted version if using melee) is highly recommended for fighting them.

Due to their high Magic level and related bonuses, it is recommended to keep Protect from Magic on at all times while fighting them.

Both Melee and Ranged are highly effective against them, but Ranged may be preferable because they will only attack with magic while not in melee range, while players using melee will occasionally be hit. Rangers should use Void armour (preferably the elite version), while meleers will want to use the best strength setups that they have.

The highest-DPS setup to use is a Toxic blowpipe with the elite Void Knight set and a salve amulet (ei). Due to the low defence of the druids, equipment like devout boots can be used in slots where Ranged strength is not offered.

While the Temple Library is adjacent to an altar, only two moderately high level players can kill the druids faster than they spawn in the southern room, and will often have to stand around waiting for spawns. In contrast, the Crypt of the Moon requires the usage of prayer potions, but has many more spawns.

Due to the self-sustainable design of the dungeon, players can stay here for a long time without needing to bank by using the altar adjacent to the druids to restore prayer, and food from the Grubby Chest to restore health as needed. If additional healing is needed the druids drop bones and all the runes required for bones to peaches if it is unlocked. Most of the drops can be stacked, alched or stored in a herb bag. For this reason, bringing fire runes is recommended, since these are not dropped by the Undead Druids themselves.

Drop rates estimated based on 28,654 kills from the Drop Rate Project, unless otherwise cited.

There is a 22/100 chance of rolling the herb drop table. When the drop table is rolled, there is an equal chance to receive 1, 2, or 3 random herbs.

There is a 12/100 chance of rolling the uncommon seed drop table.

There is a 1/100 chance of rolling the gem drop table.

The drops below are only available during the Twisted League.