The Underground Pass is one of the pathways to reach Tirannwn, the elven lands of western Gielinor. Traversing the enormous and hostile dungeon is the focus of the eponymous Underground Pass quest.

Please keep in mind that although passing through this dungeon requires less interactions than that of the quest, it is still a very dangerous place, and caution is advised. Note: If you have completed Underground Pass, and are going to Tirannwn for, say a Treasure Trail step, start the quest Regicide by talking to King Lathas before attempting to navigate past Lord Iban's temple. If you don't, you won't be able to open the temple doors.

If you are planning to enter the elf lands after the Underground Pass: 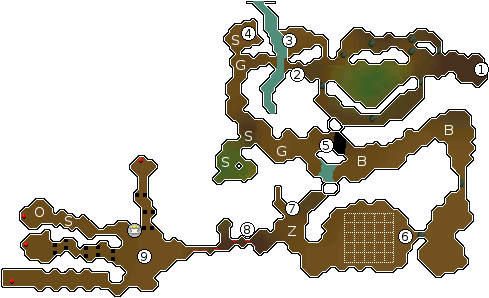 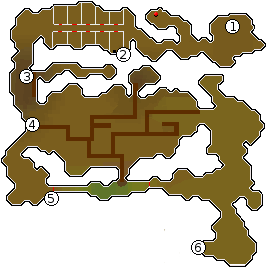 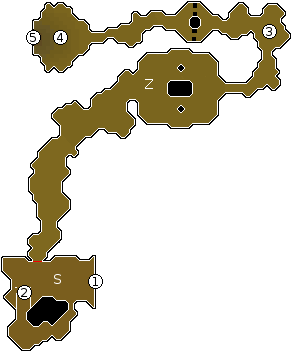 Note: The well (marked #4) located in this area is used to recharge Iban's staff.

This is the level beneath Iban's Lair.

This is the last, and arguably the most frustrating part of the whole Underground Pass.

If you need food, head as far south as you can until you find a way to descend. Once down, talk to Kamen the dwarf. Decline his brew: it will lower your Agility level, thereby causing you to have a higher chance of falling into the abyss. Whether or not you accept the brew, he will then offer to sell you food for 75 gp.

Congratulations! You have reached the end of the Underground Pass!