From Old School RuneScape Wiki
Jump to navigation Jump to search
This article is about the Fossil Island area. For other uses, see Underwater (disambiguation).

Underwater is a location just off the northern coast of Fossil Island. In order to enter the underwater area, a player must first travel to a small island via rowboat, located at the northern tip of the island (transportation icon

). On this smaller island, a player can then select Dive on the rowboat to enter the underwater section. They will also find a bank on this island, which can be used to quickly grab required items. After a player has travelled here once, a new option is unlocked when using the Museum Camp rowboat, allowing quick travel to this island.

While the fishbowl helmet and diving apparatus are not required to dive, it is heavily suggested that players bring them in order to extend their visit. Flippers can also be worn in order to "run" underwater and swim faster, though the player is limited by weighing no more than 27kg to do so. Weapons can be wielded underwater; however, they prevent players from being able to swim. Shield-slot items such as defenders cannot be wielded whatsoever. Attempting to access the deeper areas with a weapon equipped or while weighing 28 kg and above will cause the player to drown.

The underwater area cannot be accessed in PvP worlds or the permanent Deadman world.

When underwater, an oxygen meter will be displayed, reflecting the player's supply of oxygen. This bar begins at 100%. As long as both the fishbowl helmet and diving apparatus are equipped, the bar will remain at 100%. If not, the player's oxygen will go down by 1% every 3 ticks (1.8s). At 10% oxygen, the player's screen will begin flashing red, indicating that they will soon run out of air and drown.

A player restoring their oxygen in an air bubble.

Drowning occurs when a player's oxygen levels drop to 0%. It doesn't cause any harm to the player, but a random amount of mermaid tears between 10 and 20 will be lost if they had any in their inventory. Any tears in the player's bank will be left untouched. After drowning your character will return to the small island.

To restore oxygen, players can either enter air bubbles, which prevent them from losing oxygen and increase their oxygen by 5% every few seconds, or catch pufferfish, which can be held onto and used to instantly restore oxygen by 15%.

This fishing activity requires at least 47 Fishing and 44 Hunter to begin. To be allowed access to the activity, players must first speak with Ceto, located just north of the anchor rope. 200 numulites are required as payment to enter the instanced area and allowance lasts for a full day. Players can also pay a fee of 20,000 numulites to gain permanent access.

This method of fishing and hunting makes use of drift nets, which can be crafted by using two jute fibre on a loom at level 26 Crafting. These drift nets can then be strung up underwater to catch fish. Annette, located in the area, will store up to 2,000 drift nets for the player. 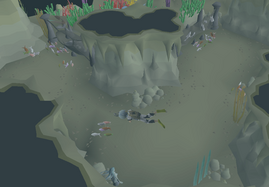 Players must then chase the fish shoals into the drift nets in order to catch them. Each fish shoal fills the net up by 10% and gives Hunter and Fishing experience based on a player's current levels. Players with a merfolk trident equipped will find it easier to scare fish shoals into their drift nets. A (uncharged) trident of the seas can be used as well.

Upon harvesting a fully stocked net, the drift net will be destroyed, leaving just the catch behind. Players can either take the resulting fish and items into their inventory or pay 5 numulites to bank all the fish and items from the net. Sardines, anchovies, lobster, tuna, swordfish, sharks, pufferfish, oysters, clue bottles, fossils, and numulites are all possible rewards from the net. Sea turtles and manta rays can also be obtained if players have the Fishing level to catch them (80 for sea turtles and 90 for manta rays). All fish have approximately the same chance of being caught, while numulites, fossils, and clues are much more rare.

Located just south of the anchor-rope, two seaweed patches can be used by players with at least 23 Farming. Seaweed spores are required for usage of the farming patch. A nearby mermaid, Mernia, requires 200 numulites to watch over each patch.

Planting gives 19 Farming experience and harvesting yields 21 experience for each giant seaweed picked. A minimum of three can be collected per patch, with the average being around 20–40 depending on one's Farming level. Seaweed takes approximately 40 minutes to grow.

The entire eastern area is an elaborate Agility and Thieving training arena. To enter, the player must first remove their fishbowl helmet by the request of Mairin, a mermaid which guards the area. There is a pile of fishbowls, which a player can use to store their helmet temporarily as they traverse the area. Without a helmet, players must rely on pufferfish and air bubbles to keep their oxygen levels up. Another method is going back to the fishbowl pile and equipping the helmet (for 1 game tick), immediately refilling the oxygen bar. 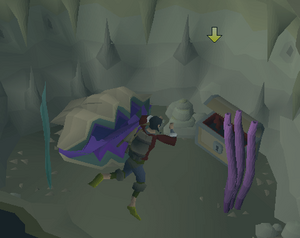 A player searches a treasure chest

After entering, players will find a scattered layout of treasure chests and giant clam shells as well as several tunnels, holes and other obstacles, such as currents, which can be traversed. A flashing arrow on the player's screen and minimap indicates which chest or clam currently contains a reward. It should be noted that chests and clams can be looted multiple times after discovering the correct location. 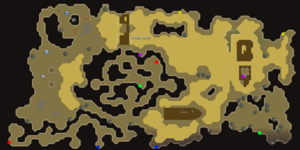 A map of the underwater area, with holes having matching colours to help navigate.

There is a 1/8.5 chance that searching a chest or clam more than once will be successful. On a successful search, a mermaid's tear and glistening tear will always be rewarded, as well as a chance of receiving 20-30 numulites or unidentified fossils varying from small to rare (fossils are obtained this way roughly 1 in every 20 mermaid tears). A player could expect to obtain roughly 170-230 mermaid's tears and glistening tears per hour, as well as 5-10 unidentified fossils of any kind.

Mermaid tears are a form a currency, which can be used only in Mairin's Market. Unidentified small, medium and large fossils, the merfolk trident, seaweed spores and bowls of fish can all be purchased here.

Level 68 lobstrosities can be found in the south-eastern area of the domain. These can only be attacked using a powered staff (Magic), magic secateurs, or a brine sabre (Melee). While players are not allowed to use their fishbowl helmets here, there are several air bubbles, which will help keep their oxygen levels up.

Lobstrosities are favoured for their many seed and herb drops.

Seaweed spores will spawn around the area randomly.

Only 5 random events can occur underwater: