Ungael is an island located in northernmost region of the Lunar Sea. An abandoned dragonkin fortress and laboratory can be found here. It can be reached by boarding Torfinn's boat directly north of the Rellekka marketplace. 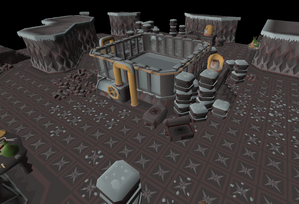 Sometime during the Dragonkin Conflicts, it was used as the base of operations for Zorgoth's experiments, which took place in the laboratory underneath the island. Here, he brought spores and fungi from Lithkren to Ungael to use for his experiments. It is here in which Zorgoth created Vorkath, and left it there in order to guard the route to the laboratory from invading humans.

Vorkath remains on the island after over 2,000 years, and is fought during Dragon Slayer II in order to retrieve a dragon key piece hidden by Robert the Strong in the laboratory. After the quest, Vorkath can be fought again as a stronger boss.

Near the stone table in the north-western corner of the island lies a single glass of dragon bitter.