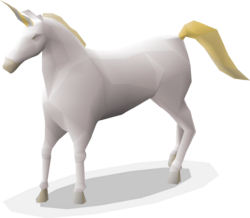 Unicorns wander around forested areas in RuneScape. On members servers, unicorns drop the unicorn horn, which are used in Herblore to make anti-poison potions. Unicorns are also one of the oldest monsters in the game, which appeared initially during the beta of RuneScape Classic. They are also one of the most updated monsters, having been graphically updated four different times.

They respawn slowly, at a rate of ~53 seconds. Due to this, it is advisable to farm them in the Kourend Woodland, kill Unicows instead, or world-hop in between kills.

The average Unicorn kill is worth 318.4.