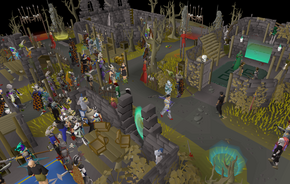 Players in the Unrestricted worlds.

Unrestricted worlds, also known as tournament worlds, all-access worlds or beta worlds, are special servers that players can log onto that gives them maxed stats, and full completion of quests and Achievement Diaries. This is ideal for practicing certain activities that require certain stats, requirements, and gear/items in order to do (such as bossing), that the player does not have on their standard account; or, alternatively, if they want to practice something without risk, like someone who is normally HCIM practicing Galvek. Only members can log onto these servers. Anything a players does in these servers will not affect their progress in the normal servers.

This server is usually open for short periods of time, and players are typically confined to the Clan Wars area on these servers.

The full list of items that players can obtain from the supplies table.

Upon logging in, players are automatically transported from Tutorial Island to the Clan Wars area. There are supplies found south of the bank chest, where players can obtain unlimited amounts of high level weapons, armours, and supplies for player-versus-player combat. Ancient Warriors' equipment, which is normally exclusive to seasonal deadman mode worlds, is available here for players to play with as well.

Players who wish to switch spellbooks can do so at the altar near the white portal where Sister Scarophia is located. Players can switch between the standard, lunar, ancient and Arceuus spells.

Players who wish to modify their combat stats can do so by right clicking the supply tables.

Unrestricted worlds are also occasionally used as a beta world to test future content and gauge feedback from players or simply to have fun. The following content have been tested by players on a beta world:

The Last Man Standing beta world was initially exclusive to 200 players, where they were selected by Jagex Moderators from an application form given in a newspost in the beginning of July. The next week, it became available to all members, and then free players the day after.

Upon logging in, players appeared in the Last Man Standing lobby, with their coffers already stored with 10,000,000 coins to begin the minigame. Players in normal worlds would still be able to see the lobby and Lisa, but are unable to go inside.

The Elder Beta was open to all members. Along with the regular facilities that an unrestricted world supplied (Clan Wars portal, free-for-all portal, spellbook altar, etc.), players could obtain an elder wand and maul from the supplies table. 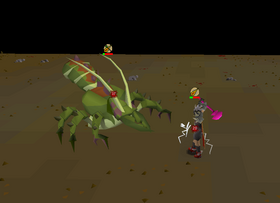 A player fights the Kalphite Queen in the Elder Beta.

South-east of the bank chest, there was a boss portal that allowed players to enter an instanced encounter with monsters weak to crush attacks (Cerberus, Chaos Elemental, Kalphite Queen, and three waterfiends), along with the option to be on a Slayer task with that particular monster. It should be noted that Cerberus' area-of-effect attack will do no damage, and the Kalphite Queen can only be fought in her first form.

Once the player enters the area, they are given best-in-slot equipment for strength bonus, excluding the helmet, for which a slayer helmet is given. The inventory is then replaced with a Saradomin godsword, two super combat potions, nine super restores, and 16 anglerfish.

A player in Mount Quidamortem, accessible via the deep-pink portal.

The load test for raids, also known as the Chambers of Xeric, was open only to members. Along with the regular facilities that an unrestricted world supplied (Clan Wars portal, free-for-all portal, spellbook altar, etc.), a deep-pink portal found south-east of the bank chest will take players to Mount Quidamortem, where the entrance to the Chambers of Xeric is found. 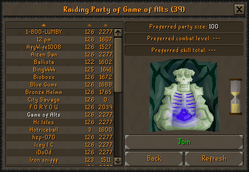 Players can use the recruiting board to create or find raiding parties, where they can find (from left to right) the number of members in the party, target number of players, the leader's name, preferred combat level, preferred total level, and the time passed since the party formed.

Once the player is accepted into a raiding party, they will join the leader's clan chat and must wait until the leader enters the chambers. The chambers contain no monsters or NPCs, as it is simply a beta intended to test the self-generating dungeons and party grouping system.

In preparation of the Deadman Spring Invitational planned on March 25th, players were able to log in to the beta world to test how the final hour of the Invitational will run at 14:00 GMT. Instead of a creeping lethal fog, large chunks of the map would be taken away at a time instead.

During the final hour, an overlay is always visible telling players whether they are safe or not, and giving them ample time to move to a safe area. This was done so that players are more likely to die to other players rather than the environment.

Upon logging in, players will be given level 94 in all stats, completion of The Mage Arena and Desert Treasure, and a pre-set of equipment. However, the prayers Preserve, Augury, and Rigour are not unlocked. In addition, they will only be able to use Ancient Magicks.

Because players have not completed Priest in Peril, arriving at Canifis via Kharyrll Teleport will result in either a vampyre knocking the player out or Abidor Crank teleporting them out. Either way, the player will end up at Paterdomus. 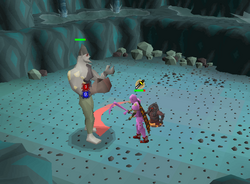 In preparation of the Theatre of Blood, players were able to log in to an unrestricted world to test various rewards to be polled for the raid, including: 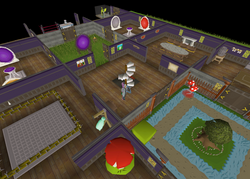 As the beta was intended to test the rewards against various scenarios, players, for the first time, were allowed complete access to the world (excluding the Inferno), unlike previous openings in which players were mostly confined to the Clan Wars area.

In addition, magic tablets, teleport scrolls and other various items were added to the supplies table for convenience, as well as ecumenical keys to instantly access God Wars Dungeon bosses. Players were also given a player-owned house fully furnished with the highest level furnitures for all rooms.

Players are also able to receive a Slayer task free of charge by right-clicking Assignment after receiving one from a Slayer master, allowing them to do so until they receive their desired task. Players were also given 100,000 slayer reward points and 2,147,483,647 Nightmare Zone points. 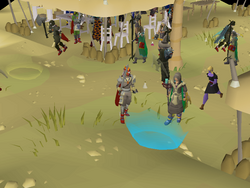 The hub portal found in the unrestricted world, with the Jad-fest portal behind them. 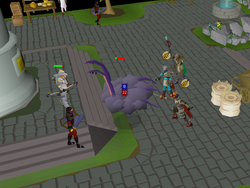 A group of players take on the Chaos Elemental in Kourend Castle.

Periodically, bosses will spawn in one of five locations (Falador Park/Castle, Al Kharid, Burthorpe, Barbarian Village and Kourend Castle) and is broadcasted in the player's chatbox. Players can access these locations through the hub portal just west of the bank, but are recommended to take a ring of dueling from the supplies table before leaving in order to quickly return. In addition, Ancient Warriors' equipment, which is normally exclusive to seasonal deadman mode worlds, is made available to all players.

The supplies table also offers pre-loaded equipment and inventories based on a player's preference for fighting players and monsters:

There is also an additional yellow portal near the hub portal, the Jad-fest portal, that is currently inaccessible. During RuneFest 2018, this portal was accessible in an unrestricted world accessible only on-site and allowed players to choose how many JalTok-Jads they wished to face, up to six.

In preparation for the All Stars: PVP Championships, many equipment such as the toxic blowpipe, Ancient Warriors' equipment and upgraded spirit shields were removed from the supplies table in an update on 22 November, as the worlds that will be used for the championships uses the same supplies table[1]. 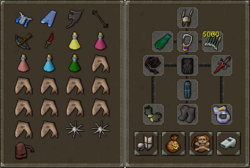 The current load-out given upon starting a game.

The Last Man Standing: Beta is a rework of the minigame, changing from looting objects around the island to having a pre-set inventory and equipment, removing the heavy luck factor in obtaining equipment to be victorious. The beta worlds are available to members, being hosted on worlds 401, 405, 407, 409 and 412.

However, due to technical issues, the live version of Last Man Standing is disabled, making worlds 317, 326, 393 and 425 normal worlds. If players attempted to join a live game, a chatbox message will state that a beta is currently live and ask that players join games there instead to test the features.

The Bounty Hunter Rework Beta is a rework of the minigame, changing how points were earned, updating the HUD, and reworking mysterious emblems. Because of technical issues, Bounty Hunter was not available in the live game for the duration of the beta.

The beta was updated a week later to change the supply table items to only include items that are typically used for player killing rather than expensive gear such as third age armour and twisted bows. The week after that saw the addition of hotspots and bounty crates to showcase the possible loot, giving players 500 points to purchase 100. 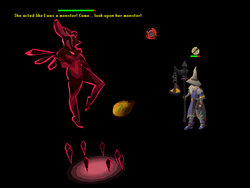 A player uses the volatile nightmare staff against the Fragment of Seren.

In preparation for the Nightmare of Ashihama boss, players are able to log in to an unrestricted world to test various rewards to be polled for the boss, including:

As the beta's purpose is to test the strength of the rewards against players, monsters and bosses, players are given complete access to the game world (excluding the Inferno), and nearly all high-end equipment and supplies available in its usual location in Clan Wars, with the typical accommodations for convenience, such as a fully furnished player-owned house and ability to skip Slayer tasks for free.