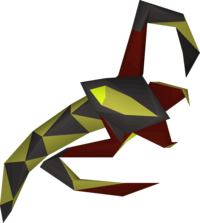 An unsired is an untradeable item dropped by the Abyssal Sire. They are to be placed at the Font of Consumption, which dissolves it, but gives the player a reward in the process.

It cannot be deposited in the bank - attempting to do so will result in the chatbox stating A magical force prevents you from banking this item!

The drop rate of any bludgeon piece is 31/64 while the player may not obtain any duplicate pieces until all three pieces have been obtained per bludgeon. However, duplicates are possible if the player receives a second unsired before offering the first.

When combined with the drop rate of the unsired, the effective chances of each item are:

When the rarities and prices of each possible tradeable reward is taken into account, the expected value of an Unsired is 4,613,022.

A player places the unsired at the Font of Consumption, found behind The Overseer.