Update:A Night At The Theatre

Since we changed the Hard Modes rewards to include Saradominist-themed cosmetics there has been a lot of discussion, feedback and fan-led redesigns. We appreciate all of this and can't thank you enough!

As a team we always enjoy your concepts for weapons. It's enlightening to see what items resonate for players, especially when they've been brought to life by others in the community!

We want to clarify briefly why the items are Saradominist. In the Second Age, when Morytania was still known as Hallowvale and unblemished by the Vampyres, the castle atop The Theatre of Blood was home to a Saradominist queen. Following the God Wars, the Vampyres claimed many valuable Saradominist relics as their own. Some of the originals can still be found deep within Lady Verzik Virtur's vault!

Of course, lore isn't all we're considering design-wise. Gameplay requirements and readability are big factors too. We hope you will find these items satisfying to use: that's why we're polling these items right now.

That's not to say that we won't be seeing some of these community-made concepts materialising eventually. We fully expect to pull inspiration from these fabulous designs for future items, but as it stands, we'll be polling the original concept for now.

We are, however, going to separate the poll question to cover each of the proposed rewards individually. Let us know what you think!

Thanks for all of your feedback on the blog! There was a lot of discussion around the item that changes the Justiciar Armour into a Vampyre-themed set.

Many of you felt that you don't use the Justiciar Armour as often as other Theatre of Blood rewards, and that you’d rather see more regularly used items receive a cosmetic change.

Here are the items that could change instead of the Justiciar Armour: 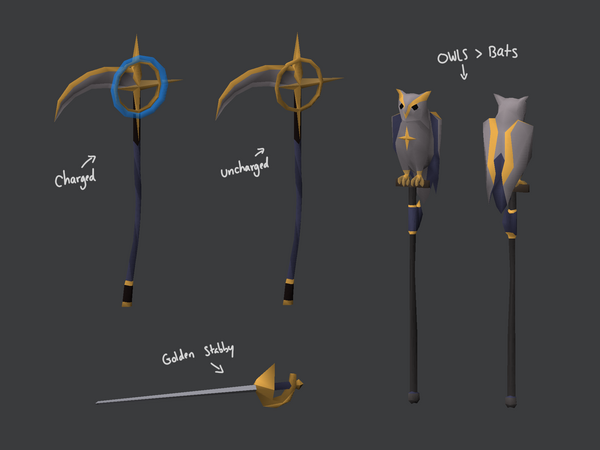 A collection of concepts for the Saradomin-themed weapons.

When used on any of the weapons, this reward would cosmetically transform it into a Saradomin-inspired version. It wouldn't change the stats or base functionality of the item. We opted not to include a reward for the Avernic Defender – it's too small to portray the right level of detail. Turns out size does matter when it comes to art!

As for the Vampyre-themed Justiciar Armour, we’ll be holding that back for a future poll. Until then, you can find the concept here.

We’ve updated the blog to highlight these changes, and the poll question regarding Hard Mode rewards now refers to the new cosmetic additions.

Old School's approach to storytelling is one of its greatest strengths. We always aim to combine compelling gameplay with narrative depth, and to lead our players naturally towards more difficult content. With our new quest, A Night At The Theatre, we hope to introduce more players of different experience levels to the wicked delights of the infamous Theatre of Blood!

Along with this new quest, we're introducing two new difficulty settings for Theatre of Blood - Story Mode and Hard Mode. Read on to find out how we're helping guide mid-level players through end-game content, all while offering end-game players even tougher challenges to sink their teeth into!

Those of you who have been with us for a while may remember back in 2018, shortly after the release of Theatre of Blood, when we pitched the idea of an Entry Mode encounter. If we're brutally honest, it wasn't a strong pitch. It was a hasty response to feedback from a small number of players taking part in the Raid on launch. Our proposal for Story Mode is what that pitch should have been. And, in A Night At The Theatre, players will fight their way through a scaled-down version of the infamous Theatre, with greatly reduced rewards, but more accessible gameplay!

Hard Mode, meanwhile, is aimed at players who have comfortably mastered the mechanics of the regular Theatre of Blood and are looking to step up their game. And we're not just talking inflated stats here - we'll be changing the very mechanics of each fight to add additional complexity and really put you through your paces.

If both Story Mode and Hard Mode are added to the game, you'll make your selection from the notice board outside the Theatre (and you'll play on Normal Mode by default). Story Mode and Normal Mode will be available to anybody who has access to the Theatre, but Hard Mode will require at least one Normal Mode completion. Only the party leader can set the mode, but the board will show what mode has been selected for all recruiting parties. We'll add additional tracking variables so that completions, deaths and best times will be mode-specific, and the scoreboard outside will show statistics for all three modes.

Rest assured, we've heard your requests for new end-game content, and we have much greater plans in the works - we're simply adapting our schedule to add new challenges in the meantime. If you like this proposal, and it proves to be successful when added to the game, we will adopt a similar approach with future Raids.

And so, without further ado, let's pull back the curtain on A Night At The Theatre...

A Night At The Theatre

A Night at the Theatre will be many players' first experience of Theatre of Blood, so we want it to be a highly playable introduction to this fearsome locale. The quest can be tackled on any mode (Story, Normal, or Hard), but is primarily designed for Story Mode. First-time adventurers can also team up with players who have already completed the quest. You'll need to complete it for the finale of the Myreque series.

A Night At The Theatre is a Master-level quest. As it takes you through a challenging (albeit scaled) Raid encounter, we'd recommend that you have 90 Combat before embarking. As it takes place in Morytania, Priest In Peril is required.

Upon completion you'll be rewarded:

Story Mode is of similar difficulty to the current Theatre of Blood, but with the following changes:

Now it's time for the toughest cookies to step up to the plate! Hard Mode is aimed at players who have mastered the Theatre of Blood and are eager for a new challenge. This isn't like the Chambers of Xeric: Challenge Mode, where we inflated stats on an established and consistent path. Hard Mode will change the very mechanics of each boss fight, giving you a more gnarly and complex encounter. Crumbs!

In terms of scaling, Hard Mode will continue to scale for players in groups of 1-5 using the existing scaling system of 75% health at three (or fewer) players.

Similarly to the Chambers of Xeric: Challenge Mode, the content will carry target times, based on group size, which will affect your chances of acquiring new and unique rewards!

Our plan is to improve existing rewards and offer some fresh cosmetic rewards:

Speeding through it? For players who finish within the target time, the following rewards await you:

A collection of concepts for the Saradomin-themed weapons.

This proposal represents a significant change of approach to end-game Raiding content, so we'd really love to hear your thoughts. Do you support our goal of helping new players get to grips with the Raid? Do you think it will work? What would you change? Share your feedback with us via our official forums, on the 2007Scape Reddit, or the community-led OSRS Discord in the #gameupdate channel.