This week's update sees the release of A Taste of Hope, the next quest in the Myreque line. We've made a change to Chambers of Xeric: Challenge Mode based on your feedback. And you can win a gaming laptop!

A Taste Of Hope

For many years, the Myreque have fought back against the reign of the Drakans. To many, they act as a glimmer of hope in an otherwise miserable existence. In recent times, the Myreque have been beset by disaster, with numerous members meeting a gruesome end at the hands of Vanstrom Klause, the brutal henchman of the Drakans. However, while the Myreque may be in their darkest hour, hope still remains. Thanks to a recent discovery in the laboratories deep beneath Meiyerditch, the Myreque may have finally found a way to take the fight to the vampyres. They will do just that in the latest installment in the Myreque questline, A Taste of Hope. 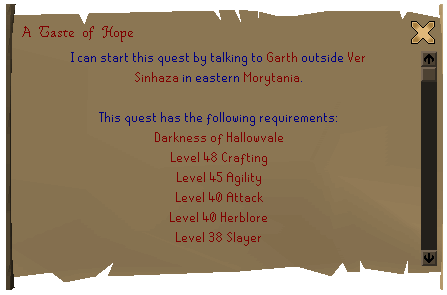 A Taste of Hope is a new Experienced level quest available to players who have completed Darkness of Hallowvale. Players who manage to complete this quest will be rewarded with the following:

You can get to the new area by walking from Port Phasmatys, taking a boat from nearby the Ectofuntus, or walking through Meiyerditch (provided you've completed Darkness of Hallowvale).

The new areas contain locations to hunt Swamp lizards, cut Yew trees, and there are new Swamp crabs for you to fight. One of the most notable additions to the map is the town of Slepe which contains a host of new characters and lore to immerse yourselves in.

Finally, we'd like to extend a special thank you to Mod Surma from the audio team for the two music tracks he has provided for today's update.

Shortly after today's update we'll be launching a new in-game poll. It's your chance to have your say on the final appearance of the Justiciar armour design.

Poll Question #1
Which of the two shortlisted designs shall we use for the Justiciar armour design when the Theatre of Blood launches? The highest voted option will win and be added to the game. 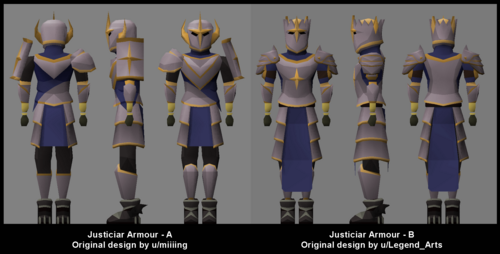 When we first polled the Theatre of Blood, Poll Question #16 regarding the Sinhaza shroud was worded in such a way which seemed to suggest players would receive the cape after their first raid completion. We wanted to make it clear that the intention was to only give a cape upon completing the Theatre at least 100 times, which is when the current Chambers of Xeric: Challenge Mode cape is issued.

Chambers of Xeric: Challenge Mode: following your feedback, Tekton's defence will scale less harshly for challenge raids consisting of smaller numbers of players, and even less for solo players. This should allow you to spec far more reliably thus removing some of the frustration. This may affect raid times overall, so we will be keeping an eye on things and possibly tweaking target times in future weeks.

Do not leave your screens this Summer.

How would you like the chance to play Old School RuneScape and tackle the Theatre of Blood on a brand-new Razer Blade Pro gaming laptop?

All you have to do is head over to our Facebook competition page and enter your details for a chance to win. It's as simple as that! You don't even need a Facebook account to enter.

If you'd like a greater chance of winning, just get your friends to enter as well. Every time you do, you get an additional 2 entries!

Please check out our FAQs and Competition T&Cs before you enter.