Update:Amulet of the Damned & CWA

Amulet of the Damned & CWA

This week's Old School update is here and it is a big one for Barrows lovers. The amulet of the damned and the flaemtar bag are sure to spice up Shades of Mort'ton, too!

We are trying out a new layout for our update posts this week. To see the details of each of the updates, click the heading. Let us know what you think!

Amulet of the Damned & Flamtaer bag

Amulet of the Damned

The Amulet of the Damned is now a potential reward from the silver shade chests found in Mort'ton. The amulet has the same stats as an amulet of glory and offers the following buffs to all of the barrows sets when worn:

The fully charged amulet of the damned is tradeable. It degrades at the same rate as barrows equipment when worn in combat however, unlike the barrows sets, the amulet crumbles to dust once fully degraded.

It is possible to combine the charges of amulets by using them on each other. Doing this can top up the charges of one amulet to make it full, allowing you to trade it.

In addition to the Amulet of the Damned being added to the Shades of Mort'ton silver chest, the flamtaer bag has been added to all chests excluding bronze. The bag is untradeable and you are only able to obtain one at a time. The bag is destroyed when dropped.

The flamtaer bag can carry 60 timber beams or wooden planks, 60 limestone bricks and 500 swamp paste. Players taking part in the Shades of Mort'ton activity should find this item saves them a lot of inventory space.

A new hat is available from the Bounty Hunter reward shop called the Hunter's honour. The hat will change between two styles depending on whether you have more target kills (blue design) or rogue kills (red design). 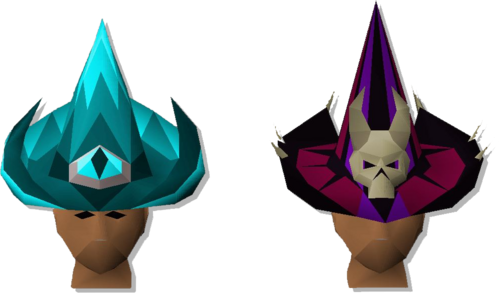 The Hunter's honour costs 2,500,000 bounties from the Bounty Hunter reward shop and is untradeable. If you do not PK but want to grab yourself the fancy looking hat, you can buy tier 1 emblems from other players and cash them in for bounties.

The granite clamp has also been added to the Bounty Hunter reward shop. This is a cosmetic upgrade for the granite maul that will set you back 250,000 bounties. Once added to a granite maul, the granite maul becomes untradeable. If you wish to remove the clamp you will get back your maul but the clamp itself will be lost.

With this week's update we have made decanting potions much more intuitive. You can now split any potion with two or more doses into any dose that you would like. The image below illustrates exactly what this means as it is rather clunky to put it into words. 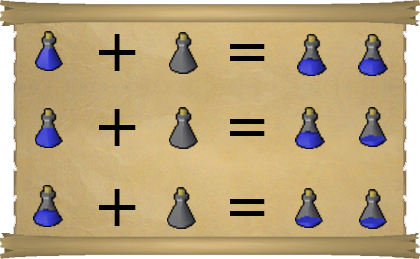 The Clan Wars Classic arena has been a longstanding request from many clan members. It was a favourite of many players that used Clan Wars in RuneScape 3 so it only felt fitting to offer the arena in Old School. Before heading back to university, Mod Alfred spent some time looking over old videos and screenshots to re-create the beloved arena.

The Clan Wars Classic arena is available on both F2P and members worlds so grab your clan mates and have a little fun battling it out in a RuneScape classic.