Though we do say it ourselves, we reckon this update is truly spellbinding! We've opened a special Beta world for members to try out the new Arceuus Spellbook before the release of A Kingdom Divided and made some main game changes that set the stage for this exciting new chapter. We've also tweaked Below Ice Mountain, rebalanced some equipment and launched more 20th anniversary merch! Abracadabra, let's be 'aving ya... 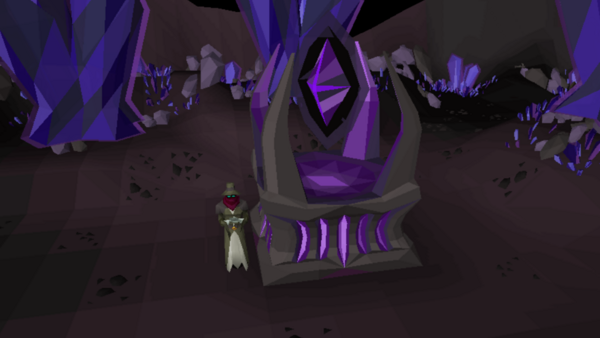 The next chapter of the Great Kourend storyline is on the horizon – A Kingdom Divided. Ahead of its release, we've been working hard on one of the additional rewards for completing this continuation. Introducing: the Arceuus Spellbook!

We're giving you the chance to experience the reworked book and try out all of the new spells across Gielinor. As of today, members will be able to log-in to the special Beta-worlds and test all the new additions and changes!

Only members can access the Beta. When the game has loaded, you can find the beta worlds W400 (US), W407 (UK) and W412 (AUS), which will be highlighted in blue within the World Selection screen.

Choosing any of these worlds will load a separate profile to your main account. Once you've logged-in, you'll find yourself within Ferox Enclave, with max skills and suitable gear, along with an Inventory full of Runes! If you're wanting to try out some other gear or experiment with different stats, head to the rooms next to the Castle Wars and Free-For-All portals, and rummage in the Supply Chests on the tables. Here you can select your gear and set your stats accordingly.

What can I do in the Beta?

You’ll be able to take part in any content you could find on the main game worlds, apart from the Inferno.

So, what's cookin' in the new spellbook? First, let's cast a glance over the already existing spells and any changes that may come with them:

In the current Arceuus Spellbook, there is a reanimation spell for each relevant creature, making a grand total of 22 spells. With the rework, these will be replaced by four new reanimation spells. No changes will be made to the amount of experience granted from reanimating creatures. 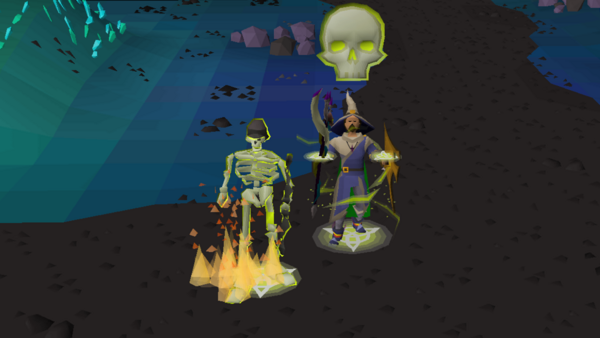 With this update, these changes to reanimation spells will also be available in the main game.

Most of the teleport spells will be unchanged with this rework. However, the teleport to the Lumbridge Graveyard has been replaced with an Arceuus Library teleport. Handy! 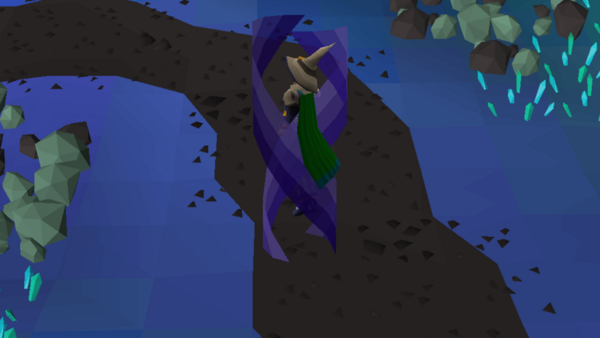 With this update, the change to teleport spells will also be available in the main game.

And for our next trick... brand shiny new spells! To use these you will have to complete all of A Kingdom Divided, apart from Ghostly Grasp and Inferior Demonbane. Demonic Offering is the only spell we've left out from the Beta, as we've not added the Demonic Ash item yet. Other than that, you'll be free to wreak havoc with these excellent enchantments: 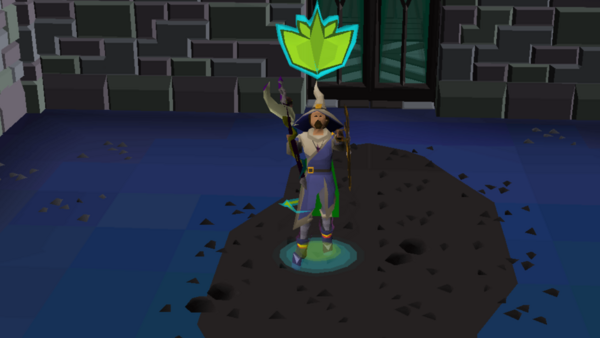 Some items can be used to auto-cast spells: 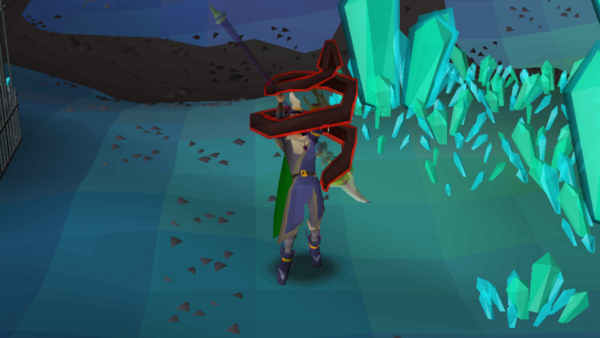 The animation for casting Greater Corruption.

To perform a Resurrection spell, players will need to equip the Book of the Dead. This new magic book will be obtained as a reward from A Kingdom Divided, acting as an upgrade to the completed Kharedst's Memoirs! 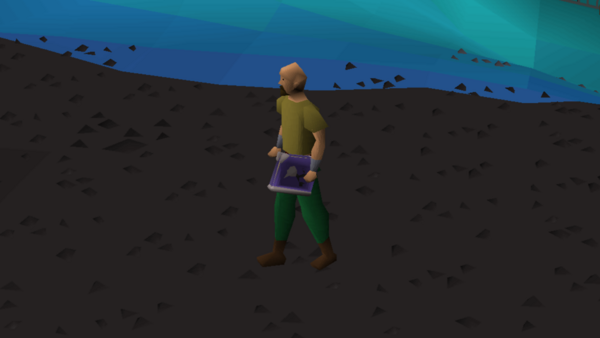 Much nicer than the Necronomicon!

The Book of the Dead would provide +6 Magic attack and +3 Prayer bonus. Completion of A Kingdom Divided is required to equip the book.

Drawing upon the power of defeated creatures, Resurrection spells bring to life an undead thrall that will aid you in battle. Yikes! This will require runes and Prayer points, and only 1 thrall can exist at a time. Thralls will remain active for one game cycle (0.6 seconds) for every Magic level the caster has. For example, if a thrall is resurrected when your Magic level is 60, it will last for 36 seconds before dying. Hey, maths can be fun - and violent!

A resurrected thrall will not act like a typical follower. They will wander the area where they were created and attack anything the player attacks, provided the target is within range.

It's possible to resurrect a thrall throughout most of Gielinor, even if the undead creature being dragged from its grave is not present in that area at the time. Certain exceptions to this will apply where the aid of a thrall will not be possible – much like how setting up the Dwarf Multicannon is not possible in specific areas.

All resurrected thralls will attack at a rate of four game cycles (one attack every 2.4 seconds). Thralls cannot be damaged and their attacks ignore accuracy checks, but it will still be possible for them to hit 0 at times. While their damage ignores accuracy checks, Protection Prayers will reduce their damage accordingly.

Thralls will not aid you in PvP situations.

Along with this lovely new Beta, we've also made some changes to the main game. Some of these are made to allow for the Beta. Others are A Kingdom Divided-relevant changes we're intentionally launching early to help ensure the main release goes smoothly! The following changes will go live with this update:

We've updated the appearance of some of the more unique hitsplats in the game, as the ones we had were not suitable for colour blind players. This doesn't impact the iconic hitsplats for things such as damage and poison, but lesser used ones for shields, armour, healing, charging and discharging.

With the slate of new spells being added to your Spellbook today, we've included an option to filter out the ones that you don't meet the requirements for yet. We're also planning to poll a visual indicator for these spells as part of Poll 75.

What can we say? We're just maintaining lore and order...

Listen up beat fiends, because we've made some behind the scenes improvements to our music system.

First, music tracks should now loop more reliably, rather than stopping half way through. Looping should occur even when music stops for a jingle or because it's been muted/unmuted.

Second, because we now have a better idea of when a music track ends, we're able to randomise the playing order! It will take a while for us to roll this out across the entire game, so we've started with the free-to-play area. Rather than the same track looping and then abruptly changing, music will now shuffle between suitable tracks when moving from one area to another.

The music in Old School is of course iconic, especially in the free-to-play area, so the track shuffling isn't totally random. Instead, different parts of the map have different sets of tracks assigned to them. This ensures each area of the world retains its musical identity. For example, there are six tracks that play in the Lumbridge area. Previously, each of these tracks would only play in a small part of Lumbridge. Now, they can play anywhere in and around the town. Once one finishes, a different Lumbridge track will kick in. Most importantly, the first track for any new arrival in Lumbridge will always be Harmony. Ahh, memories.

And that's it! We'll be keeping a close eye on your feedback over the Beta period and we look forward to hearing what you all think.

Some items were missed in last week's first batch. They've now been added:

The Gilded Spear and Gilded Hasta have increased attack rate from 5 to 4, to match their Rune equivalents.

Guthan's, Verac's, Dharok's and Torag's legwear now have -11 ranged attack instead of -7 ranged attack, to match the change we made to other plate legwear.

The Granite Hammer now requires 50 Strength to wield instead of 50 Attack and Strength. Its stats have also increased to be more in-line with the Warhammer changes of the previous week. If players no longer meet the requirements, this item will be un-equipped to your Inventory (if not full), failing that your Bank (if not full), and failing that it will drop to the floor. Players will receive an in-game message if this occurs.

The Obsidian Mace (Tzhaar-ket-em) has an increased attack rate, from 5 to 4.

Simply show the item to Ramarno and he'll offer to convert them into shards. Remember, any relics you find in the ruins can be traded at the Varrock Museum for extra change!

We've made some changes to the Vault beneath Ice Mountain:

Players can now interact directly with the forge to add/remove/check the amount of Barronite they have collected.

The Imcando Hammer has been updated to include some of the original Hammer's functions that were missing.

You can now store the Imcando Hammer in your Player Owned House.

Players looking for some extra Kudos will now see the Camdozaal Relics appear on the Kudos list in the Varrock Museum.

When preparing and offering fish in Camdozaal, the menu is now context-sensitive to which fish you have in your inventory.

One for the gym bunnies here: players can now replay Altas's[sic] workout cutscene (for a fee) and even keep track of how many times they do it.

The Barronite Mace now has a Strength bonus of +40 and an anti-Golem bonus of 15%, as mentioned in the original newspost.

We're thrilled to see so many of you battling against the newly awakened Spirit of the Sea, Tempoross! We've made some small QoL changes to make an even bigger splash:

A new overlay has been added to the lobby and the surrounding area. This will show how many players are waiting in the lobby, and indicate how long until the next encounter.

Your Personal Bests and Time Taken stats are now displayed after successfully defeating the boss. They've also been added to the stats board in the Ruins of Unkah.

A quick-climb option has been added to the Tempoross lobby ladder, as well as a water pump aboard the ship.

UI on both mobile and PC has been moved to create more space on the screen.

We've added even more new lines to celebrate the 20th Anniversary year of RuneScape! You may have already spotted these in the Anniversary packs we sent out to content creators - well, now they're coming to the merch store for everyone to get their hands on!

The RuneScape anniversary is not the only milestone we're celebrating. Angels Scapes has now designed a whopping 200 official pins and keyrings for the merch store! You can grab the special commemorative Fire Cape, alongside other designs celebrating content over the past 20 years: 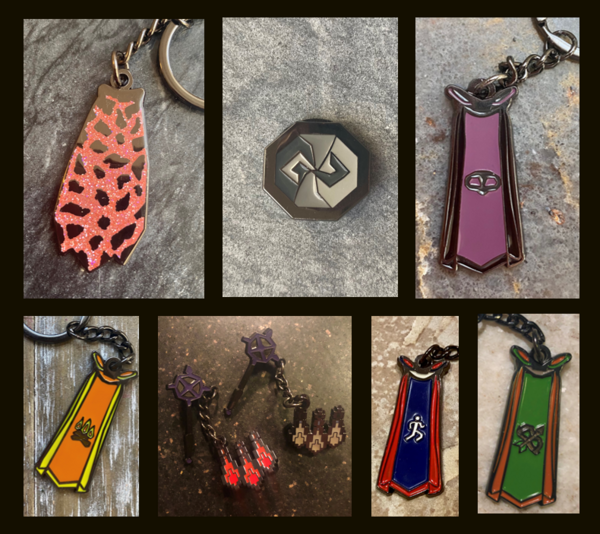 It's Raining Cats and Dogs!

This one should make your tail wag: you can now interact with several cats and dogs across Gielinor! Address your pats and strokes to: