The poll for Dragon Slayer II has come to an end with overwhelming results! Whilst development can now officially begin on the quest, we've some space in the schedule to offer you a new Content & QoL poll!

In order to allow for further feedback, we're delaying the in-game poll unil early next week. In the meantime, catch up on the latest changes below!

Weapons, Armour and all things related

Dragonfire Shield
The Dragonfire Shield currently only has one model, regardless of it being uncharged or fully charged. This is something we'd like to change by adding a slight variation to the model colour as shown in the below image. 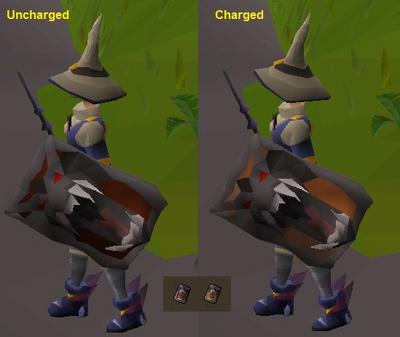 Poll Question
Should the uncharged version of the Dragonfire shield be recoloured to look duller when it does not contain any charges as shown in the image? If this passes, a similar change would also be made to the Ancient Wyvern Shield

Rock Thrown Hammer
Currently the only way for players to deal the final blow to Gargoyle's is via the Rock Hammer, which is limited to melee range only. We'd like to offer a ranged alternative to this - the Rock Thrown Hammer.

Poll Question
Should the Rock Thrown Hammer, a stackable ranged version of the Rock Hammer be available in all slayer stores? Each kill would use 1 Thrown Hammer, similar to Salt Bags/Ice Coolers. This would work with the Gargoyle Smasher slayer unlock.

Leaf-bladed Battleaxe
The Leaf-bladed Battleaxe has some impressive stats but we believe there is room for improvement. We'd like to offer a better alternative to always using the Leaf Bladed Sword by making the Crush and Slash attack bonuses the same (+72) whilst also applying a passive 17.5% damage buff when attacking Kurasks and Turoths only. 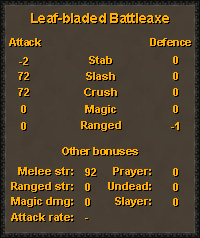 Poll Question
In order to improve the overall effectiveness of the Leaf-bladed Battleaxe versus the Leaf-bladed Sword, should the Slash and Crush attack bonuses be made the same (+72) as shown in the image, alongside applying a passive 17.5% damage bonus when attacking Kurasks and Turoths only?

I think it's fair to say that the Ahrim's Staff is quite underwhelming when compared to almost any other combination of magic weapons and offhands. We'd like to give the staff a slight boost to magic damage and have the option of making it one handed in order to try and balance out its usefulness.

Poll Question
Should the Ahrims Staff be given a 5% Magic damage boost?

Poll Question
Should the Ahrims Staff become a one-handed weapon?

We've seen your feedback regarding the Serpentine Helm and its effectiveness since removing the passive application of venom and the strength bonus reduction. We're not intending on adding the passive venom feature back. Simply put the effect was far too powerful, but we'd like to offer a buff that only applies to things you attack.

Currently when the helm is worn with, it treats every weapon as a venom inflicting weapon, giving a 1 in 4 (25%) chance to apply venom to any target you are attacking with melee when hitting more than 0. We'd like to increase this percentage to 100% when using any venom inflicting weapon. In addition to this, we'd like to extend this effect by adding a 50% to apply venom when using poisoned weapons.

Poll Question
Should the Serpentine Helmet give a 100% chance to inflict venom when worn in conjunction with a venom inflicting weapon? Attacks that hit more than 0 will trigger this effect and it will only apply to NPC's.

Poll Question
Should the Serpentine Helmet give a 50% chance to inflict venom when worn in conjunction with a poison inflicting weapon such as the Dragon Dagger Poisoned? This would also apply to poisoned arrows and bolts but not the Emerald bolts (e) special ability. Attacks that hit more than 0 will have the chance to trigger this effect and it will only apply to NPC's.

If you're an archer using a one-handed Ranged weapon, you don't have that many options for shields. You can opt for the few shields out there which provide Ranged bonus, or go with a tankier, melee shield at the expense of your Ranged attack being lowered.

We'd like to offer a new type of shield, aimed at offering an alternative for those of you using Ranged: Wooden & Leather shields. The intention of this is to fill equipment gaps that currently exist, ultimately aimed at mid-level players, whilst making use of under used items such as nails. 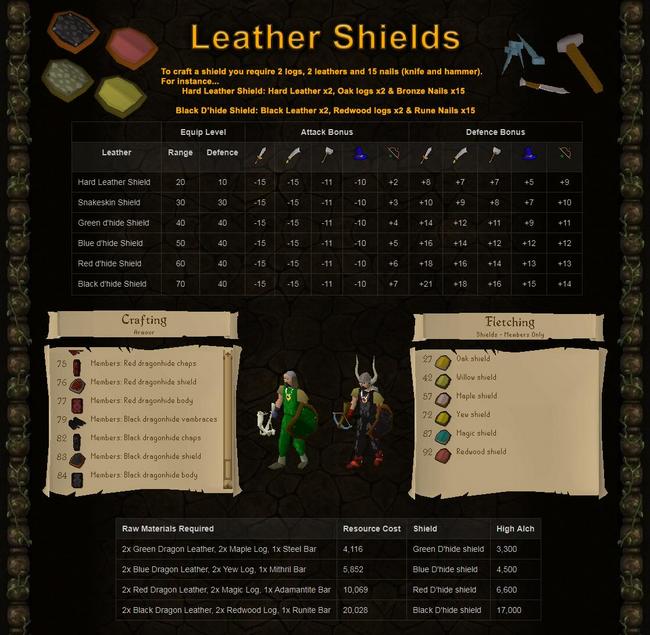 The wooden variants of the shields will have the same defence requirement as their leather counterpart, minus a range requirement. The defensive stats would be similar to that of the broodoo shield, but with a positive range defence and slightly lower magic defence.

Currently in Barbarian Assault, using a Ranged attack style is less effective than it was previously. We had to resolve an issue which allowed the Blowpipe to be abused by simply changing the ammunition slot to contain the type of arrow requested. This was never an intended mechanic of the minigame and needed to be fixed.

We now have inconsistencies where other ranged weapons can abuse the same method.

It needs to be made clear that regardless of the results of this poll, we will be resolving this by preventing the usage of any ranged weapons that do not utilise an ammunition slot on the character interface such as Throwing Knives, Darts and Chinchompas. It's not an intended feature and needs to be fixed.

When this change is made, ranged will be less effective overall due to the requirement of using a specific tier of ammo (Bronze to Mithril), whereas the other combat methods have both high and low end options. We'd like to propose a rework to this which is designed to make the Ranged attack style closer to its current strength.

To offset this change, we'd like to introduce of new type of ammo into the minigame. There will be four variants of arrows, with all of them being equal in terms of the damage they can deal. These arrows can be used with any bow that utilises ammunition, and are balanced so that lower ranged levels will still be hitting for lower damage whilst higher levels will hit much more.

The new arrows are as follows:

These new arrows will replace the current Bronze to Mithril arrows that are dispensed in the game, following all the same rules as those arrows. They will have the following stats:

Using these arrows with a Magic Shortbow (i) and full Void will be slightly superior to using full Void with a Blowpipe & Rune Darts.

Poll Question
We're changing how Ranged works within Barbarian Assault which will affect its viability. To balance this, should we introduce a new range of arrows only useable within the minigame? These will replace the existing arrows & will be slightly superior to current single target methods available. If this fails, existing arrows will remain whilst all ranged weapons that do not use ammunition will be disabled. Read the blog for more details.

You've asked for more quests and we're willing to give you them! Alongside the upcoming Dragon Slayer II quest which passed with flying colours, we're hoping to introduce some shorter more novice quests which expand upon the Zeah storyline.

Before we look at the quests, we want to offer a new reward alongside those currently offered for the Client of Kourend - Khardest's Memoirs. Khardest's Memoirs is a book that can hold the pages which are being polled as rewards from the new quests detailed below. When you first get the book, it cannot store any charges, but adding a page increases the capacity by 8. We are intending on introducing a quest for each of the houses, each offering a page. This would give the book a total of 40 charges. In order to charge the book 1 Law, 1 Soul, 1 Mind and 1 Body rune must be used on a new statue in the Kourend woodland.

Poll Question
Should the Client of Kourend have an additional reward added - Kharedst's Memoirs? This book would hold 8 charges for each house page that gets added to it, allowing players to teleports to the houses of Kourend. Players can charge the book by using 1 Law, 1 Soul, 1 Mind and 1 Body rune on a new statue in the Kourend Woodland.

The requirements for the quest would be as follows:

Completion of the quest would reward players with the following:

Poll Question
Should the quest "The Queen of Thieves" be added into the game?

Poll Question
If the quest "The Queen of Thieves" is added to the game, should it reward players with a page that can be added to a new book, Kharedst’s Memoirs? This would increase the amount of charges the book can hold by 8, and would allow players to teleport to Piscarilius House once charged. Players can charge the book by using 1 Law, 1 Soul, 1 Mind and 1 Body rune on a new statue in the Kourend woodland.

The Depths of Despair
Artur Hosidius has gone missing and Lord Kandur Hosidius needs the players help to find his son and bringing him home in this new novice quest.

The requirements for the quest would be as follows:

Completion of the quest would reward players with the following:

Poll Question
Should the quest "The Depths of Despair" be added into the game?

Poll Question
If the quest "The Depths of Despair" is added to the game, should it reward players with a page that can be added to a new book, Kharedst’s Memoirs? This would increase the amount of charges the book can hold by 8, and would allow players to teleport to Hosidius House once charged. Players can charge the book by using 1 Law, 1 Soul, 1 Mind and 1 Body rune on a new statue in the Kourend woodland.

We recently increased the stock of Teleport cards you can buy at Diango's Toy Store from 10 to 100. These cards are used to charge the Chronicle with up to 10 teleports. Unfortunately, the change wasn't as useful as it could have been, as you can still only buy 10 Teleport cards per day. A clear "Oops" moment on our end! We'll be addressing this by increasing the amount you can buy per day but we'd also like to offer increasing the number of charges the Chronicle can hold!

Poll Question
Should we increase the number of charges the Chronicle can hold from 10 to 1000? Teleport cards are used to charge the Chronicle and can be purchased from Diango's Toy Store. You would still only be able to purchase the daily limit of Teleport cards.

Poll Question
Should we allow players to maintain their Mage Training Arena points when the Pizazz Hat is destroyed?

Poll Question
Should the Medium Ardougne diary award the player with 3 teleports to the Ardougne allotment patch per day instead of the current 1 teleport?

Poll Question
Should the Hard Ardougne diary award the player with 5 teleports to the Ardougne allotment patch per day instead of the current 1 teleport?

Poll Question
Should players be able to exchange a Tome of Fire for 100 burnt pages?

Poll Question
Should players be able to set a toggle on the Looting Bag to deposit all of an item used on it into the bag?

Poll Question
Should Implings spawns be added to Fossil Island?