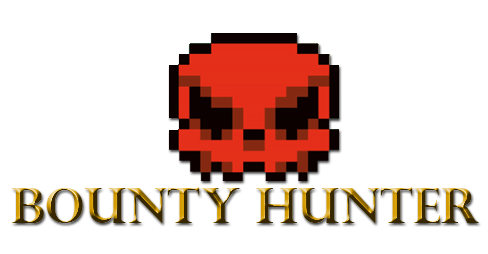 It is finally here, the update that has had you all waiting with baited breath... Bounty Hunter! It is time to head into the wilderness to take on the biggest challenge PvP has to offer, hunting down your target and claiming your reward.

When you enter the wilderness on world 318, the only Bounty Hunter world, you will see a small interface appear in the top-right of your screen. The Bounty Hunter target system will track down a player that is close to your combat level and will match you both up as targets.

Once you have been assigned a target you will get a hint about what level wilderness they are in. This hint will also change colour depending on how far away from them you are, helping you track them down.

If you leave the wilderness for two minutes, or log out for any period of time, you will forfeit your target. If you forfeit too many targets you will incur a penalty and will be unable to receive a new target for a considerable period of time.

When you catch up with your target you will then, of course, be faced with the task of killing them. Killing you will also be at the top of their list so you should expect the fight of your life when facing off with your target.

The player that ends up winning the fight will have a good chance of receiving, in addition to what their target risked, an emblem. Emblems can be traded in at the Bounty Hunter rewards shop in exchange for bounties, a currency used to purchase rewards from the shop.

There are 10 tiers of emblem with increasing values. On your first target kill you will have a chance of receiving the lowest tier.

Once you have your tier 1 emblem you have a choice: you can choose to try your luck at upgrading your emblem or trade it in for the reward.

If you get a target kill with an emblem in your inventory the emblem will upgrade to the next tier. The value of the emblems are as follows:

Emblems are always risked so you will have to be willing to take on a loss for a chance to upgrade them. If you are holding multiple emblems only the highest tier emblem will be upgraded.

The emblem trader in Edgeville will gladly take your emblems off your hands in exchange for the previously described bounties. But what can you buy with these bounties? 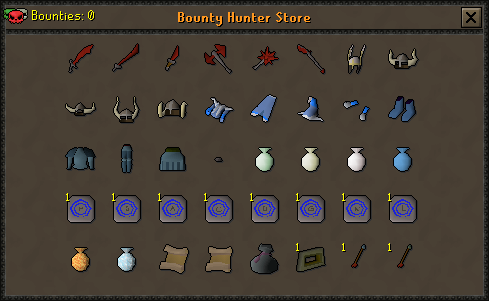 Along with a bunch of valuable gear that is available for purchase, several new items will be entering the game through the Bounty Hunter rewards shop. 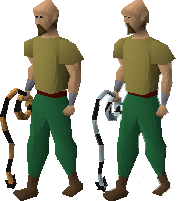 The following items will not be included with the initial release of Bounty Hunter as they only just hit the 75% mark shortly before the poll was closed on Monday:

All of the rewards, apart from looting bags, will be tradeable and can be sold on to other players. The rewards offered in the Bounty Hunter rewards shop should allow skilled PKers to profit so they can keep doing what they love; slaying noobs.

What is next for Bounty Hunter?

The rewards and target system currently in place will certainly stimulate an active PKing environment as well as giving PvPers something to offer to other parts of the game. With that said, we would like to expand on the rewards and tweak the target system to give both the most enjoyable and most valuable experience possible for players taking on the challenge of hunting down their targets.

In the coming weeks we will be looking for any and all player feedback on the system as well as thinking about the possibilities of new, original items that could potentially come from the Bounty Hunter rewards shop. We have set up a dedicated Bounty Hunter feedback thread as a hub for any suggestions or criticisms you may have to share.

Last week the goblins took a beating. Their forces were simply not enough in the fight to try and overthrow Falador. As a result, the goblin commanders have ordered a mass raid, largely increasing the number of troops they have heading into the city.

Grab your RPG and head over to Falador, you are definitely going to need it.

Make sure to catch the Old School developer Q&A at 5pm BST over on the RuneScape Twitch!