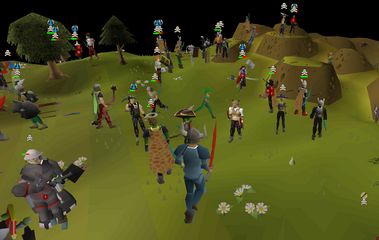 As you know from our blog back in March, we’ve been looking at how to return Bounty Hunter to the game in a fun and innovative way, without allowing bots and farmers to gain a foothold. This week, you’ll be seeing the results! 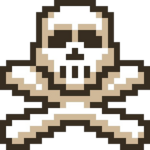 The biggest change you’ll notice is that on Bounty Hunter worlds, all players in the Wilderness are skulled automatically – but these aren’t your ordinary skulls! They feature different designs that reflect the highest tier of Emblem you (and your opponents!) are currently carrying.

A new task has been added, which will net you an increased chance at an Emblem in exchange for killing your target with a dragon dagger. Other than that, tasks have not changed and will still be assigned every 20 minutes.

Lastly, you’ll notice some new restrictions on which accounts can participate in Bounty Hunter. To join in the fun, you must now accumulate 20 Quest Points and 48 hours of total play time. This is intended to prevent bots and farmers exploiting the minigame, and we hope you’ll see the value in doing so – even at the cost of having to play through non-PvP content to join a PvP activity.

As always, you must have a combat level of at least 30 in order to play Bounty Hunter.

Finally, we’ve upped the ante to make the minigame even more exciting. In order to be assigned a target, you’ll need to be carrying either an Emblem of any tier, or 20,000 gold pieces.

Their replacement is Antique Emblems, which will appear as loot drops from your targets. There’s also a chance for the loot roll to upgrade the Emblem, although this is dependent on the following factors:

There is also a silent cooldown that caps the rate at which players can receive Emblems, similar to the system used for Marks of Grace.

In addition to the items from Last Man Standing and Slayer, which have been returned to the Bounty Hunter Reward store, the following rewards will be available to purchase with points:

These foods now heal the same as their non-blighted counterpart, but can only be eaten in the Wilderness:

These sacks will act as a stand-in for the runes used in their respective spells, but only in the Wilderness:

These notes can be exchanged for the item listed at any Bank, provided that you don’t already have one of the items promised. If you do, you can always trade the note away, or keep it for when you need it:

This untradeable weapon will require 75 Attack to equip. Upon purchase, it will be in an inactive state. You must then use 50,000,000 coins on the longsword to turn it into a usable version. Once activated, the sword does not have charges or degradation mechanics, but can only be used in the accursed lands of the Wilderness.

If you die in PvM with the sword, it will remain on your person. If you die in PvP, however, and the sword is not a protected item, it will be deleted and your PKer will receive the 50,000,000 coins.

You can still spend your old Bounty Hunter points in the previous version of the Bounty Hunter shop, but The Bounty Crate and Decorative Emblems have been discontinued, and are no longer available to purchase.

However, existing Decorative Emblems can still be traded in for points or mounted in a Player Owned House.

w45 Deadman will still give out Archaic Emblems, just as before, and its version of the shop has not been changed.

To get started with Bounty Hunter, you’ll need to be on a Bounty Hunter world, such as w329. After that, all you need do is get your PvP gear ready and head on up to the Wilderness, where, provided that you’re carrying an Emblem or at least 20,000 coins, you’ll be assigned a target.

Your next job is to track down that target – you can teleport straight to them to make this easier. If they’re in a hotspot, you’ll get some bonuses for the kill – but watch out! There’s a bounty on your head too, and any other player could be coming to claim it!

When you’ve completed your kill, there’s a chance your target will drop an Antique Emblem. You can trade these with the Emblem Trader in Edgeville for a reward, or you can try to upgrade it by hunting down more targets. The higher tier the Emblem, the more loot you’ll get! Be careful though – if you’re killed and drop your Emblem, you’ll lose it for good.

If you’re a veteran PKer, you might like to try completing tasks for a better chance at getting an Emblem. Tasks involve fulfilling specific requirements while killing your targets. They also make PvP a little bit riskier – so of course, you’ll get a bigger reward.

You might have noticed that content aimed at PvMers, skillers, and questers frequently passes polls, but content aimed at the PvP community usually fails. As nice as it is to assume that all our non-PvP content is ten times as fun and brilliant, we suspect that there are other factors at play.

For the players on the wrong end of a PKing spree, there’s a huge incentive to oppose anything that might work to the PKer’s advantage – whereas this is simply not the case when it comes to non-PvP content.

In the past, we’ve thought about rectifying this problem by restricting polls to just the player groups who are most invested in the content on offer, but ultimately, somebody will feel left out of the conversation.

The Wilderness has been an integral part of the game since RuneScape Classic, and it deserves just as much love as the rest of Gielinor. In this update, we’ve tried to come to a compromise where nobody is missing out on awesome new Wilderness content, but nobody is being disadvantaged by it, either. That’s why the blighted items are only usable in the Wilderness and Blighted Vesta’s Longsword is only usable on Bounty Hunter worlds, which are entirely avoidable for those who don’t want to participate in the minigame.

We really hope you enjoy playing the new and improved Bounty Hunter – and if you’ve never tried PvP before, now might be a great time to dip your toes in! 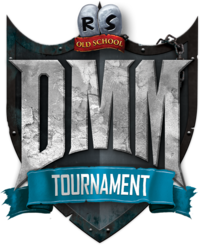 As always, this Beta will take place on a world that doesn’t use your saved game profile – commonly called Unrestricted/Tournament Worlds. This means that you can visit that world and play without affecting your account’s stats, items or position in the 'real' game worlds, and any progress you make on the Unrestricted World will be wiped when you log out. This means that logging in and out during the Beta playtest will reset your state in the Beta. Players are advised not to log out if they wish to avoid being reset – especially as you can't log in after the permadeath phase begins.

We'll confirm that the playtests are going ahead as planned by 09:45 (BST) or 08:45 (UTC) from the @OldSchoolRS and @OSRSPvP Twitter accounts.