The Bounty Hunter rework beta is now live! The Bounty Hunter rework was announced at previous RuneFest events, and we're pleased to finally offer the content to you. The key main changes are summarised and categorised below, but if you'd like as in-depth look at the mechanics (as described in the initial design blog) then please revisit the original design blog from August (though do note that some of the concepts differ from the update, following your feedback).

It's important to note that whilst this beta is live, you'll be unable to access Bounty Hunter (in its 'current' pre-rework state). We've also made changes to existing mysterious emblems. See below for summaries of the key changes!

Bounty points are now awarded for killing targets. Killing multiple targets in a row begins a killstreak, which awards more points. Bonus points are awarded for every X target kill as per this table:

These points are designed to replace the ones previously earned in the minigame for spending at the Emblem Trader's rewards shop. If you have old points/emblems leftover, you'll still be able to use them - more on that later!

Completing bounty tasks will award 10 points immediately. Your tasks will cycle every 30 minutes, and only one may be completed within that time. Unwanted bounties may be skipped up to three times per day. The potential bounty tasks you may receive are:

If you have ideas for new tasks or think of some while playing the beta, please include them in your feedback! Remember, we are unable to implement any tasks that require specific equipment.

The collapsible BH interface has been updated and shows:

The new interface with the details of a target displayed

The new interface while you don't have a target

The old mysterious emblems have grown weathered and worn, transforming into archaic versions. These can still be traded for points at the older version of the Bounty Hunter store. In the original blog, we mentioned allowing players to trade then for a flat rate of 2,000,000 GP to prevent them from crashing in value. Since then, the active trading price has increased to well above 2,000,000 GP so this has not been necessary.

New mysterious emblems can be bought and sold at the Emblem Trader and will allow you to earn some extra gold while playing the minigame. The new interface will tell you when your target has an emblem of an equal or higher tier than yours, making you eligible for an upgrade which doubles your emblem’s value. If you are not eligible, it will allow you to skip your target without a penalty.

The decorative T10 emblem can be purchased from the trader for 100 of the new BH points. 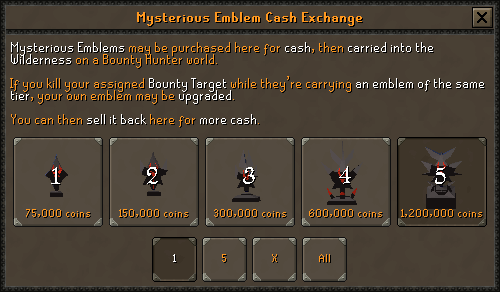 The new emblem exchange interface - tier 5 emblems cannot be bought - only sold after a tier 4 emblem has been upgraded.

The current Bounty Hunter minigame in the live version will be inaccessible during the beta as both versions cannot exist simultaneously.

The rewards that passed the Bounty Hunter rewards poll, the Dagon'hai set and Godsword animation recolours, will be added to Larran's chest and the BH rewards shop respectively with the full launch of the minigame rework in a few weeks.

The Rune Pouch and Looting Bag

In the rewards poll blog we mentioned that we'd like to make both the Rune pouch and the Looting bag tradeable. We had opted to do this following your feedback that players would no longer be able to indirectly purchase Rune pouches using GP following changes to the mysterious emblems (as they're able to do now).

In the rewards poll itself we asked you whether it should be possible to own multiple Rune pouches or Looting bags. Both polls failed (74.7% and 74.3% respectively).

We've made a glaring oversight. By allowing the Rune pouch and Looting bag to be tradeable, the ability to own multiple versions would occur by default.

The results of the poll contradict what we said we'd like to do. Which leaves us in a tough spot (entirely of our own accord). We identified some potential options, and we've opted to do the following: we'll poll making the Rune pouch and Looting bag tradeable (and thus being able to own multiple versions) in the poll which follows the upcoming Twisted Leagues poll. The outcome of that poll would supersede the previous poll questions. We appreciate that it's not ideal, and we apologise firstly for the inconvenience, and secondly for not giving the design of the poll its due diligence. In the meantime (until the aforementioned poll), Rune pouches are obtainable only via the Slayer reward shop, or the Bounty Hunter reward shop.

We would also like to offer the Rune pouch to come from other thematically fitting content, like the Mage Training Arena, in the future. If the community prefers they remain untradeable, this can be made a higher priority to restore some of the item's accessibility.

We know it's a rather sizeable change to an established system, not just in terms of mechanics, but also how rewards and other associated content is affected too. We've prepared an FAQ to try and answer questions we expect to see asked. Throughout the release of the beta we'll continue to monitor the release and update the FAQ accordingly.

What will happen to my existing mysterious emblems?

Mysterious emblems from the old version of the minigame will transform into 'archaic emblems'. These will have a different appearance and will not be available in any other way. They can still be cashed in for the old Bounty Hunter points at the Emblem Trader. They cannot be traded to other players or sold to the Emblem Trader for GP.

Will I have access to the old Bounty Hunter shop?

If you have any old Bounty Hunter points remaining, you will be able to access the old shop via the Emblem Trader. This shop will stay open for a while, but eventually we'll phase it out to avoid some accounts having 'discontinued' emblems.

Will the new shop have all the items from the previous one?

Yes, all items will be re-costed to match the scale of the new points system. The exact prices are still subject to balancing.

How will Ironmen access items that only come from the BH shop?

The ring of wealth and magic shortbow upgrade scrolls are important for Ironmen. It's not fair to expect Ironmen to participate in Bounty Hunter just to access these items so we currently considering where else they might be made available. One option is to add them as a rare drop to the Wilderness Slayer loot table. Let us know in your feedback where you think they belong.

Will the minigame receive unique rewards in the future?

We would like to add more rewards as an incentive to play the minigame. We are currently discussing the way PvP content is introduced following concerns about the PvP community being underserved by the polling system. Any potential change to the way we add content requires serious consideration and clear communication with the community. Because of this, additional rewards are unlikely to be ready for the full launch.

If you have any other questions about the rework, feel free to Tweet @JagexGambit on Twitter, or leave discussion points on the game update threads on Twitter and Reddit. If the same queries arise consistently, this FAQ will be updated with the relevant information.

We hope you enjoy the beta and look forward to hearing your thoughts. All feedback and suggestions are welcome, so please leave them in the feedback threads on Twitter, Reddit and the Official Forums!

We've got lots of new merch lines on the official merchandise store! Take a look at the new t-shirts, mugs (it's not quite a mug like Ash's, but they're still rather nice!), desk mats, coasters, and pins!

T-shirts: the RuneFest 2019 design on dark-grey and black, a RuneFest dragon-inspired design by MMORPG (pre-order), and Vorkath, Bob's Axes and Catherby designs