In last week's dev blog about F2P, we talked about the problems with players downloading autotypers to advertise their trade offers. Apart from the obvious difficulties for anyone trying to read the sea of spam, it provides a perfect opportunity for hijackers to sneak malicious code onto everyone's computers within the autotyper software.

We've therefore built a simple autotyper into RuneScape itself, and updated the chat system to let you block all the autotyped chat if you don't want to see it.

Right-click on the 'Public chat' tab to see the updated options. 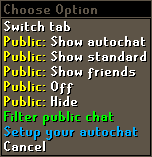 In particularly busy places such as Varrock, Lumbridge and Edgeville, RuneScape's chat system will throttle the rate at which normal public chat can be used. It won't stop you having a normal conversation, but if you've got something to advertise, you'll likely be better off using the new autochat system.

In tonight's livestream, we'll be showing off some more of the new costumes for the forthcoming clue scroll update and talking more about the new skill designs from the PDC competition. Join us at 5pm BST on Twitch.