It’s that time of year again! The snow has fallen, and presents are waiting to be delivered. Who is going to ensure everyone gets their gifts on time? This year's event is small but fun and quirky – requiring minimal graphics and dev time, allowing us to bring you the Bounty Hunter tweaks that were released recently.

To start, speak to the Duke upstairs in Lumbridge castle, and prepare yourself for some pretty odd goings on. As per usual there is a new costume reward for completing the event, and all previous Christmas rewards will be unlocked if they are not already, along with all Christmas music tracks.

Here are some words about the event from the developer herself:

This year’s event is deliberately quite small as we wanted to fulfil our promise to spend less dev time and graphics time on events, and more on content which stays in the game. Firstly we had a brainstorming meeting where the whole team was invited to submit ideas. Then I had to sort through those ideas to select those that were scalable enough to work and that could be achieved with minimal graphics time. This was quite a challenge, as some of the ideas were really awesome, but just too big to develop in the time. We settled on something that could take a distinctly RuneScapey twist, but still be recognisable as being connected with a traditional holiday event.

The majority of the graphics time was spent on the rewards by the lovely Mod West whilst I tackled the mapping of Lumbridge and the decoration of the castle.

The event itself is relatively straight forward technically, although Hans did prove a bit of a challenge. This was mostly thanks to his insistence on walking round the castle complicating matters somewhat, as your tasks have to do there could occur at any point on that route. However, with judicious use of Multi-NPC technology and some magic, it worked out in the end. 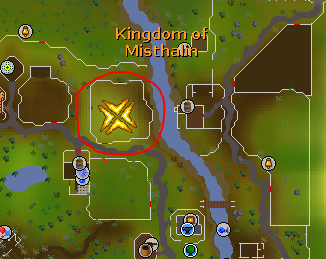 The bonus event content is found in this cow pen - not the one across the river Lum!

There’s an added bonus party game this year - as I was tinkering over a weekend and came up with a twist on the traditional party game of pin the tail on the donkey. Head to the north cow field to try it out. I was messing with some interface code and thinking about the party games that one is subjected to and decided that one of them needed to be in RuneScape (I’m not sure how many mince pies I’d eaten by this time, but I’m sure it had an effect). Whilst there aren’t any rewards for it, I figured it would be a nice little extra and rather fun.

With new players trying out the game in response to the Mobile launch, many of whom don’t know RuneScape or its subscription model, we’ve been using this prompt for a while now to let them know about their options. However, the message screen we’ve been using is very plain, and we’d like to see whether the new players respond better to one with more functionality and some illustrations, so a selection of them will be shown the new version. This shouldn’t otherwise impact their gaming, and it may help grow the community if it works well – which would suit everyone.