We've re-opened the Christmas 2006 holiday event for the festive season. Head over to Musa Point on Karamja, and meet Shanty Claws on the pier north-west of the banana plantation. Shanty's got a mission for you, rescuing childernapped childerkins from the stinky gublinch. 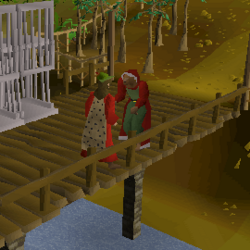 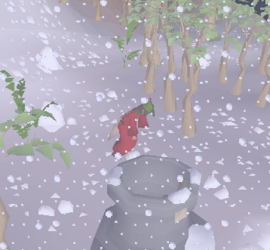 This holiday event was originally created by Mod Tytn. 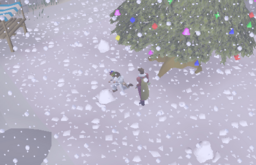 Although the 2006 Christmas event involves snowballs, back in 2006 you couldn't throw them at each other. That feature came in a later year. For our event, we've made a few adjustments to the 2006 code so that you can pelt other players with snowballs as much as you like.

The reindeer hat now has a chance of spawning snow on the ground when you perform its emote, provided you're in a suitable place and there isn't already lots of snow present, so you can get more snowballs when you need them.

We've also added a festive Wintumber Tree to Varrock marketplace, where the weather has taken an unexpectedly snowy turn. You can pick up snowballs there too. 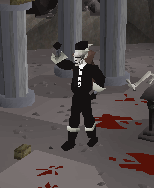 The Anti-Santa is the embodiment of all that is evil and in a grinch-like way he wants to ruin Christmas. He has kidnapped Santa and stolen all his hats and Christmas crackers. You may see Anti-Santa roaming around the Wilderness. If you defeat him you have a chance to get some additional Christmas crackers or Santa hats. Keep an eye on our Twitch channel and Twitter to see when the Anti-Santa will appear.

Don't be fooled though, Anti-Santa is no push over and he bites back... perhaps you can find a special weapon to which he is weak?

We've got a few fixes for you too:

After the Christmas break, we're planning to kick off January with the next batch of Slayer updates. Provisionally we'd like this to include the Slayer ring, the ammo and the initial areas of the new dungeon to contain the new monsters. If we can get a suitable model for the Slayer helm, we'll definitely include that too.

If you'd like to see how we're getting on, you can keep an eye on our Twitter channels where we often like to preview our work in progress: @JagexAsh, @JagexReach and @JagexMatK.

Our regular Thursday Q&A livestream will run as usual this week, at 5pm GMT on Twitch.