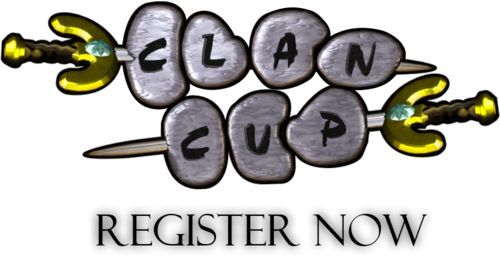 Last week we posted a thread outlining our initial plans for the clan cup. Based on the feedback we received the plan for the event has been reworked and spruced up. 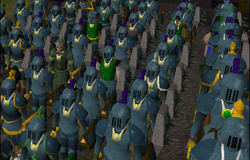 The All-Out Cup is what it says on the tin, it is an all-out battle and you can bring as many people as you can pull. This Cup will highlight those clans with really active players who know how to fight in large groups.

The Pure Cup is the same as the All-Out Cup, but Defence-noobs are not allowed. All participating clan members must be 29 Defence or lower.

The 10v10, 20v20 and 30v30 are simply wars with matched opponents. Clans expressed their desire for more matched opponent cups, and it benefits clans of all sizes, so it seems like a good fit for the Clan Cup.

There will be one PvM cup; the Head-to-Head Cup. This cup will be held at the PvM Arena.

The PvM Arena will be a safe area in which different boss monsters will be spawned. Clan leaders will be able to access the PvM Arena and invite their members between the times of 6pm BST Saturday and 2am BST Sunday.

The Head-to-Head Cup is a battle between two clans to steal kills away from the opposition. Both clans will be set up in the PvM Arena where bosses will be randomly spawned, the clan that deals the most damage to any boss that spawns will get a point. The clan that has the most points by the end of the one hour time limit will be the victor.

To prevent any underhanded tactics being used, there will be a board outside that will display the results of the events that have taken place.

Due to feedback received on the previously proposed endurance cup, it will no longer be happening.

In order to ensure that a clan doesnt rely on the same five people every week, each participating clan members can only take part for a maximum of two weeks total, and the same five clan members may not be used more than once as a group.

At the end of the 5 weeks that the Clan Cup will run for, the Skilling clan with the most points will be declared the winner of the Skilling cup.

As with the PvM Arena, there will be a notice board outside of the Skilling Arena to show the results of any events that have taken place.

Global Rules - These rules will apply throughout all cups.

a) All events must take place between 6pm BST Saturday and 2am BST Sunday each week.

b) All conversation regarding the times and world for the event must take place on the appropriate Cup Planning thread.

c) Only leaders must post in the Cup Planning threads.

d) Where necessary, both leaders must post agreement to a time and world on the appropriate Cup Planning thread by 23:59 BST on the Friday prior to the event weekend.

e) If one leader suggests a time and date and no response is made from the second leader, the time for the event will be at the time and on the world the first leader originally suggests.

f) If the two leaders cannot agree on a date or a world the time of the event will be at 8pm BST on the Saturday of the event weekend and the world will be world 333.

a) Only those members listed as members of your clan when you registered can be used during a clan event.

b) The defeated clan leader has 24 hours from the time of this post to raise any disputes.

c) Should your opponent not show up within 15 minutes of the starting time, you will win by default.

d) Should your opponent not show up within 15 minutes, post in the appropriate Clan Cup Result thread within one hour of the start of the event that you have won by default

e) In the event of no posts about the event result by 23:59 on the Sunday following the event, both clans will be disqualified.

a) If you believe that your opponent has broken any of these rules, post in the appropriate Clan Cup Disputes thread. b) Any dispute must be accompanied by evidence, we will accept evidence in any form although video or screenshot is preferable

a) It may be necessary to grant byes to clans due to the amount of entrants. If this should be necessary, we will do so by selecting clans at random to receive these byes.

1. All battles must take place in the clan wars arena.

2. The arena and rules being used will be determined by the representatives of each clan and confirmed in the PvP Clan Cup Planning thread.

3. Both leaders must post agreement to an arena and set of rules on the PvP Clan Cup Planning thread by 23:59 BST on the Friday prior to the battle weekend.

4. If one leader suggests an arena and no response is made from the second leader, the arena and rules will be at those that the first leader originally suggests.

5. If no agreement is made between the two clan leaders, the following default arena and rules will be used

b. All combat styles allowed

6. All battles are non-returning

a. No limit on clan members that can attend

a. All clan members must have 29 Defence or lower

a. Limited to 10 members per side

a. Limited to 20 members per side

a. Limited to 30 members per side 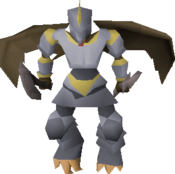 a. Must take place in the PvM arena b. Limited to 15 members per side

a. Must take place in the Skilling arena

b. Limited to five members

c. No member of any clan may take part in more than two events during the cup

d. The same group of five clan members may not be used more than once

The progression of the PvP section of the tournament will be very simple, with a loss meaning elimination.

The progression of the Head-to-Head cup will be elimination style, with the losing team of each matchup being eliminated.

The points gained by all clans would be totaled after the final weeks event and the clan with the highest overall Skilling points would win the cup.

The winners of each cup will become permanent fixtures in the landscape of Old School, with every winning clan getting a dedicated statue in an appropriate location somewhere in the game. If a player left clicks a statue, they will see a message boasting the victory of the clan and letting them know what cup they took.

To register your clan for the Clan Cup head over to the Clan Cup registration forum thread and post the required information with the entry form.