Week 4 of the Clan Cup just passed and it ended up being an excellent set of battles. Numerous finals took place between some of the top clans in Old School and thousands of people tuned in to watch them unfold live through the RuneScape Twitch.tv channel.

Ancient Fury vs Reign of Terror

Over the weekend Reign of Terror and Ancient Fury faced off in several final and semi-final wars. All of their wars were livestreamed through the RuneScape Twitch.tv channel and the recording of the events can be viewed below.

The first war that took place between Ancient Fury and Reign of Terror on Saturday was the P2P All-Out final.

For several minutes the number of players on either clan stayed reasonably even with no clan taking any significant lead. When both clans had about 70 members remaining Ancient Fury really took control of the war and Reign of Terror's numbers started dropping quickly.

By the end of the war Ancient Fury were sitting at 58 members against Reign of Terror's 0. It was a very convincing win for Ancient Fury and one that definitely set the tone for the next few fights.

Ancient Fury's victory in that war won them the title of the winners of the P2P All-Out Cup 2014. 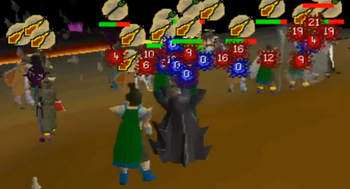 The second war between Ancient Fury and Reign of Terror was the final for the P2P 30v30 Cup.

This match-up lasted only a few short minutes with Ancient Fury flying ahead from the very first kill. Reign of Terror did manage to pick off a few Ancient Fury members, however at the end of the war the score was heavily in favour of AF with the ending numbers sitting at 27-0.

Reign of Terror turned the tables on Ancient Fury for the F2P 30v30 and took the win in just a few short minutes. Ancient Fury were down to roughly 14 members when they decided to leave and forfeit the victory.

It was an incredibly convincing win from Reign of Terror and one that showed they are definitely worthy of being the winners of the F2P 30v30 Cup. 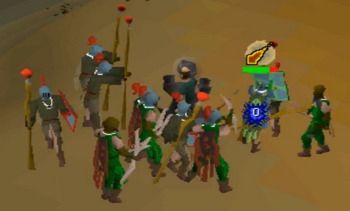 In what turned out to be the longest war out of all that took place on Saturday, Ancient Fury and Reign of Terror were only 1 kill apart for a large majority of the fight. The war ended up lasting over 20 minutes but in the end Reign of Terror snowballed a two kill lead that they spent 15 minutes attempting to grab and turned it into a victory.

It may have been a slow victory, but it was still an incredibly decisive one for Reign of Terror. They are the winners for the F2P 20v20 Cup 2014.

Damage Incorporated vs Reign of Terror

Damage Incorporated took on Reign of Terror later on in the evening on Saturday to try and grab the title of winners of the F2P 10v10 Cup.

Reign of Terror ended up taking the win making them the winners of every non-pure F2P cup.

The Clan Cup is nearing completion with a majority of the remaining finals taking place this coming Saturday. There will also be one final the week after for the Skilling Cup.

Once the Clan Cup has reached it's conclusion we will be creating in-game statues for the victorious clans that will remain fixtures in the landscape of Old School forever.

Congratulations to all of this week's winners and good luck to those taking on the challenge this coming Saturday.