This week we have a bunch more graphical improvements coming from the recent graphics quality of life poll. We've also made some changes to the Raids drop table to make prayer scrolls and the Olm pet more common.

Those lucky players who have managed to get their hands on a rock golem pet can now recolour it using one of the following ores/rocks:

A chunk of plain rock from the Feldip Hill outcrops will let you restore the original form.

On top of the rock golem recolour change, we've also introduced a number of other graphical quality of life improvements!

Some players felt that elite void didn't quite fit with the other void equipment, so we've recoloured the robe top and bottom to make them darker. 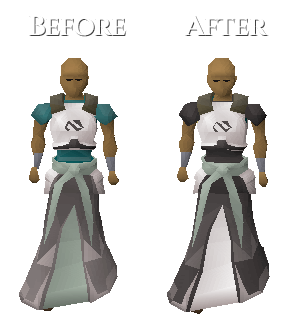 Uncharged dragonstone jewellery and the uncharged Pharaoh's sceptre have been darkened slightly to make them more distinctive from their charged versions.

The scroll of redirection now has a unique appearance, making it easier to tell apart from clue scrolls!

Thormac can enchant your fancy looking lava battlestaff for the usual cost of 20k.

You can revert your lava battlestaff by selecting the 'Revert' option, however you will not get your ornament kit back when doing this.

The Hairdresser found in Falador has upped his game and can now offer many more haircuts.

You will now perform an animation when crafting battlestaves and when making wines.

We've also seen quite a lot less Olm pets than we may have liked to, so we have made it substantially more common. It remains an incredibly rare pet, but you're now a little more likely to see one around from time to time.

There were a few lucky players who were able to get the pet in its incredibly rare state, and we'd like to give them a shoutout so they can retain their hard-earned bragging rights: