The new Continent, what is it?

A developer blog has just gone up that will help give you some insight. This is your chance to learn about Civitas illa fortis, Port Roberts and the Colosseum. You can even help craft the new continent by submitting your ideas for content to fill it up, or even by naming it.

Head over to the developer blog and take a look.

A while back, whilst talking about our ideas for rest of the year, we mentioned the possibility of introducing the first ever major expansion to Old School by increasing the land mass of the RuneScape world by 50%. This will result in an entirely new continent on the world of Gielinor filled with a new variety of towns, cities, quests, challenges, PvM raids and environments. The new Continent, what is it?

What has RuneScape offered us so far?
For 13 years now, the world of RuneScape has been explored more times than anyone can count. From the darkness of the Sanguinesti region to the mysterious and still yet to be released Prifddinas in Tirannwn. In retrospect, we've seen the current map offer RuneScape players a variety of adventures. You've once again safeguarded the Temple of Light against the advances of the Dark Lord's elves, you’ve established clans to dominate and explore. You've witnessed PvP evolve in the Wilderness & PvP worlds while meticulously expanding and discovering new skills to master the most efficient combat styles. RuneScape was all about exploration and we think it's time you had a new path; a path that will lay the foundations for many more years of exploration and discovery.

What can we expect?
With the new continent, we can expand our creative design beyond imagination. With a fresh platform for new ideas, we can innovate, create and discover new paths to truly deliver fresh and exciting content that we’d struggle to manage without this new space. Without a new platform, we run the risk overcrowding and jeopardising the existing traditional content structure you’re used to and familiar with.

Here are some ideas we’ve had for the new continent. 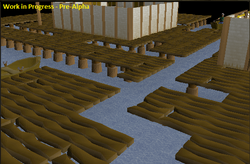 This is Port Roberts, a large floating platform town which offers vital trade and a trade route between the sea and mainland. Despite a large dependency from the mainland, Port Roberts is considered a slum due to its lawless ties with piracy and illegal smuggling. Acting as a hub for passing pirates who frequent the docks with illegal trade, the Port’s ties with piracy attracts a lot of attention from charters, merchants, and the Gnome navy armada. The Gnome’s pre-established fleet and tradition of seafaring has lead them to track down and, as best they can, reduce and eliminate the illicit trade that plagues the sea towns of the mainland.

The port will offer the player new fishing spots off the platform, new protagonists who play a significant role in the day to day work of the port and valuable transportation between various main land ports, including those to the existing RuneScape map. As a twist, the inhabitants of the port will respond to you based on your allegiance, resourceful and helpfulness towards them. If you’re sworn to them and resist the advances of the gnome navy, they’ll be more generous with their shop prices, the amount of fishing they’ll allow you to do and illegal trade items you can buy. If you’re not a favourable visitor to the town, you might encounter some hostility.

Civitas illa fortis
An additional sneak peak welcomes you to Civitas illa fortis. A Roman themed empire of discipline, combat, honour and dominion. This huge town boasts one of the largest combat training and endurance tests in all of Gielinor, the great Colosseum. As an expansion to the previously popular duel tournaments, the Colosseum will offer the ultimate duelling tournament and experience. 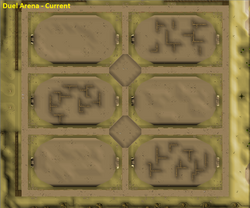 Building upon what the duel arena has already achieved, the Colosseum will match the duel arena in size and scale, only its combat ground will be the same size as all 6 duel arena arenas combined. With spectator seating circling the arena, viewers can watch the ultimate showdown between combatants fighting for the crowds support, and the reward of all entrants’ fees. 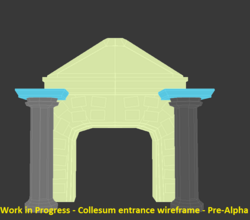 Located in the north western hemisphere of the new continent, Civitas illa fortis offers numerous coastal and mainland services such as sea-fishing trawlers, charters and direct access routes across the land-space to various other towns and cities in the area.

Some of which will include a new ‘race’ of beings, an underwater city, towns plagued with turmoil and placed on the brink of extinction through volcanic uncertainty, and new lairs of beasts who terrorise and lay waste to towns who question their rule.

The possibilities for what is available and what we can do with such an expansion are almost limitless. Our only boundary is your imagination, and with such as vibrant, committed and creative community, that’s a boundary we’re unlikely to come up against. The purpose of this expansion is to build a platform to reintroduce the mystery of the unknown, reinvigorate the pursuit of exploration and to provide the game with something new. Old School is shaped by its community, and its community will shape this expansion.

How will this work? Simple; frame the way you want to change the world, make it about your experience. Send us your ideas for what content you think should feature on the new continent.

Finally, and most importantly, we need a name for this new continent. If you have ideas, feedback and suggestions, please do send them to us through the usual channels. Forums, twitter and our community mailbox, [email protected]