We have opened up a discussion on our forums about the Corporeal Beast.

The Corporeal Beast is a boss that many players have requested for quite some time and we now have the opportunity to introduce the monster into the game. We want to make sure that every aspect of the boss is how the players want it to be, so we need as much feedback as you can give.

Here is a sneak-peek of Corporeal Beast in Old School from the recent developer Q&A. Mod Reach and Mod Alfred attempted to take him on as a duo.

Head over to our forums and chip in on the Corporeal Beast discussion.

As you may or may not have seen, Alfred and I have successfully managed to rebuild the Corporeal Beast from a 2012 archive of the game and then reverted stats, animations and effects to the 2008 launch era. We now have a fully functional, mapped and deadly boss ready to poll and launch. If you didn't know this and want to see screenshots, videos or get more news, I'll provide links to such at the bottom of the thread!

Whilst there is a lot of hype to once again be united with a pre-EoC Corp Beast, there are a few issues we need to iron out before we can release both to the poll module and the game.

How should we introduce it?

Corporeal Beast was originally introduced with Summer's End quest in 2008. We can't give you this quest again. We don't have an active build of the quest in our archive and the quest features numerous functions and requirements that Old School simply doesn't reach including the Summoning skill and a non-functioning Wilderness.

We'd like to know how you want to see it introduced and if there should be any prerequisite requirements. Some options include:-

This is a one of the more trivial problems we need to resolve before launch, but important we find a solution soon! Please do give us feedback on this!

What should it drop? 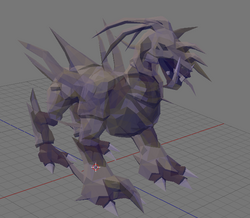 This will make or break whether we see the Corporeal Beast introduced. We're aware that there is a minor expectation to see the original spirit shields (Spectral, Arcane, Elysian & Divine) return but we're also aware of a significant call for them to be nerfed or re-balanced beforehand. On top of this, we also have gaps in other armour slots that can be filled with new, best in slot, gear that the Beast can drop.

With drops, we're aware that whatever is dropped needs to be both rare, good looking and somewhat over powered. Last year, we introduced powerful offensive weaponry with the launch of God Wars. A year on, we can do the same again with defensive armours.

It's important to note that are some point, we do need to move forward with weapons and armours. We WILL NOT look to make a giant leap from our current best in slot gear every few months, instead gradually or even yearly introduce something new. Not implementing new armours will eventually bring us to a stalemate one day with everyone equipped in the best available gear - we do need to move on and slowly introduce newer, better weapons and armours at a pace you decide.

This is not a leap towards EoC or Pre-EoC over powered weaponry. We'll look to do this on your terms, at your pace.

We have a few options:-

The feedback to this is crucial. Please do discuss your thoughts, feelings and ideas surrounding this.

If you've missed any of the Corporeal Beast hype, video's or livestreams then follow me on Twitter (@JagexReach), subscribe to the Old School YouTube channel or view the latest Dev Q&A streams on Twitch.tv/RuneScape.